12 Of Your Faves Who Want You To VOTE TODAY! 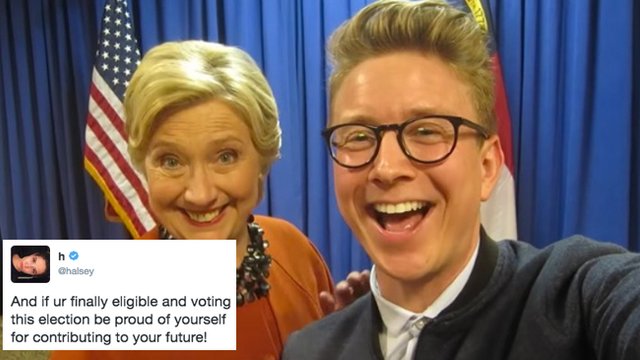 From Matty Healy to Pete Wentz, everyone who is anyone knows you need to get your a** in the polling booth!

In case it somehow escaped your attention, their is a US presidential election going on at the moment. We know right - they kept that one quiet didn't they!

Anyway, if you are in the States today, congratulations, your long, nightmarish hellscape of an election is almost over. Only one thing left to do now and that's get out and VOTE! No excuses, this one is important...

And, in case we are not enough to convince you on our own, a few famous faces want you to vote too. Here's just a handle of them...

Just fucking VOTE okay and stop being so fucking mean to each other.

Tomorrow go out and vote - with purpose decide your future

we're in line to vote early & not leaving until we cast our vote!! if you have ANY questions at YOUR polls call 1-844-IM4-HILL!! #StayInLine pic.twitter.com/T9ZFTpWouc

"Look how far we've come from having no voice to being on the brink of making history." —@Beyonce https://t.co/jfd3CXLD1s pic.twitter.com/rniw5dOdMT

My name is Nugget and I approve this message. GO OTEFind out where: https://t.co/rL2nZQ97cd pic.twitter.com/qgoUYddQaC

#ImWitHer because I fear for our nation's safety under a Trump presidency and because I refuse to participate in sanctioned prejudice.

i dont mean to be a tease but....like...imagine not having to hear about donald trump anymore

Seriously, what more do we have to do to convince you?

Get out and vote!