Here’s Everything You Need To Know About Living With Endometriosis 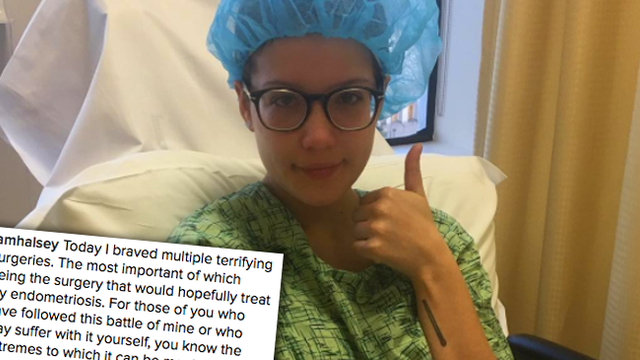 Halsey has been hospitalised for her medical condition, but what is it?

Over the weekend, our favourite Kingdom-dwelling, kick-ass chart topping Queen Halsey checked in with her followers on Instagram to talk about and update us all on her health issues.

If you've been following Halsey for a while, you'll know she suffers from a debilitating condition called Endometriosis. This past weekend, she underwent surgery to try and put a stop on the pain caused by the damn thing.

Today I braved multiple terrifying surgeries. The most important of which being the surgery that would hopefully treat my endometriosis. For those of you who have followed this battle of mine or who may suffer with it yourself, you know the extremes to which it can be mentally exhausting and physically painful. OK HONESTLY I'm in total agony right now (and I'm going to be in excruciating pain for a while cause I had quite the cocktail of procedures today). But in my recovery I am thinking of all of you and how you give me the strength and stamina to power through and prosper. If you suffer from chronic pain or a debilitating disease please know that I have found time to live a crazy, wild, rewarding life AND balance my treatment and I hope so much in my heart that you can too. I'm gonna be off the map for a few days but please know even if I'm not on social media I am thinking of you. #endowarrior #endometriosis

It's not the first time that Halsey has opened up about what it's like to live with Endometriosis, but her decision to share her experiences with her followers is a reminder that it's important to keep sharing stories of strength and inspiration regarding the condition. Unfamiliar with it? Here's everything you need to know about Endometriosis:

So what is Endometriosis?

According to the NHS website, Endometriosis is a common condition where tissue that behaves like the lining of the womb (the endometrium) is found outside the womb. You know when you have your period, and that lining builds up and then sheds? In the case of Endometriosis, the lining builds up outside of the womb but has no where to go so it stays and continues to build up, causing inflammation and discomfort.

And how can you tell if you have it?

The most common symptoms include: Painful, heavy or irregular periods, pain in your tummy, pelvis or lower back and pain during or after sex. The pain is often so severe that it prevents you from getting up or moving around. We've all had our fair share of bad period pains but if it literally starts to prevent you from going about your day, it might be time to see someone about it - it's not just limited to that one dreaded week either. The pain can occur throughout your hormone cycle too.

FYI, the diagnosis of the condition can be difficult.

The pain can go untreated for years in certain women, because the symptoms are just all over the place. In some people, it might just manifest as severe period pain. In others, it could be much worse. Many women who experience severe pain will end up being misdiagnosed. Some say it could just be bad period pain, IBS, a ruptured cyst or even mental illness.

Halsey shared an "Endo Moment" back in 2016 where she described what she goes through when she experiences a flare up of the condition. Lena Dunham also shared her experiences in her Lenny Letter back in 2015.

If any of my fans or followers have #endometriosis having a rough time today. laying in bed thinking of you. pic.twitter.com/LOQVn5BsSg

The cause isn't actually known and there's no known cure to stop it either.

Literally no one knows how or why this happens. According to the NHS, it's believed that it is caused by womb lining not leaving the body properly. It might also have hereditary links too, so if you mum or grandma had it, you might suffer from it too.

Remedies include the usual heating pads and hot water bottles, painkillers and peppermint tea. In some cases, people opt for surgery to have the scar tissue removed from outside of the womb.

Being diagnosed with Endometriosis doesn't mean you're instantly infertile.

Yes, the condition affects your reproductive system due to the scarring of the tissue but it is also estimated that 50% of women who suffer from Endometriosis don't have any severe trouble with their fertility. It all depends on a bunch of different factors too including age, location of the scarring and the severity of the condition.

It's a lot more common than you think.

Just because people don't tend to discuss the condition openly, doesn't mean it's rare. In fact, it affects 1 in 10 women. Thanks to celebrities like Halsey who continue to bring it to the forefront of the conversation with young females - particularly on social media, people are sharing their stories and helping find a cure to beat the f*cker!