14 Tweets About Hating Christmas That Are Just Way Too Real 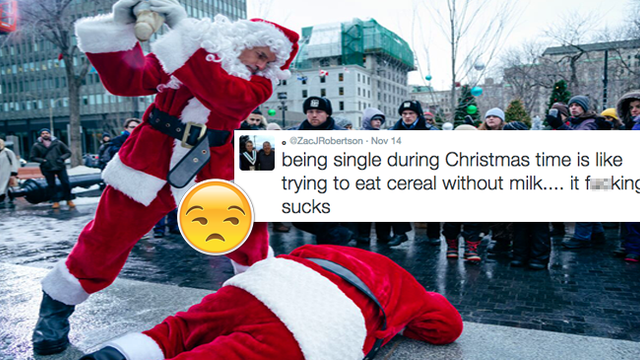 "The best thing about Christmas? Nothing."

On a scale 1-10 how much do you hate Christmas? All that build up and hype just for a day full of family arguments, disappointing gifts that nobody asked for and (if you're old enough) the worst hangovers known to man. Long story short, Christmas is overrated and should be deleted altogether. These people get it...

When you can't even afford to feed yourself, let alone buy your whiny little brother that video game he wanted. Sorry about it.

Don't think I'll be able to afford Christmas present this year, I can't even afford life

Christmas is just like any other mediocre day and a harsh reminder that you are single and alone.

being single during Christmas time is like trying to eat cereal without milk.... it fucking sucks

Honestly... this time of year is just the WORST.

im getting fat and my skin sucks merry christmas

Everything is a lie.

RULE: No one should start "celebrating" Christmas before 00:00 on December 25.

OMFG IT'S LESS THAN TWO MONTHS UNTIL CHRISTMAS?!?! Shut up and die, all of you. #ThisIsBS pic.twitter.com/xqSfku3z9H

Don't even get us started on the premature promotion of everyone's STUPID Christmas adverts.

And the feelings that we definitely didn't ask for that come along with them. FFS!

And also... WHY IS NO ONE TALKING ABOUT THE ILLEGAL NOVEMBER DECORATIONS?

Everyone's bitching about the election but no one is doing a goddamn thing about Christmas decorations in FUCKING NOVEMBER.

Spare a thought for those who are surrounded by colleagues who insist on having a Christmas Jumper day.

There is literally nothing cute about Christmas.

Not the godforsaken Christmas markets either...

Bad Santa 2 is in cinemas from 23rd November. For more information, click here.