Is There Such A Thing As Being "Too Woke"?

It's all fun and games until it actually hurts.

Another day, another nonsense. From the moment you wake up, until the time you close your eyes at night, the increasing absurdity of politics and social unease threatens to crush us all under the weight of its enormity.

Wokeness is a full time job and the collective fatigue we're all feeling is a sign of the times.

So, we read the articles, watch the news reports, laugh (and silently scream) at the satire, and dutifully tweet about The Daily Nonsense™. We feel that the only way to keep away The Badness™ and protect our future is to be hyper aware of every last thing that could potentially hurt us.

If ignorance is bliss then none of us have felt bliss in years. While wokeness is a virtue that may one day save us from the dystopian YA novel we're almost certainly descending into, there's no doubt that burn-out is one of the biggest challenges for anyone who calls themselves a progressive in these times. 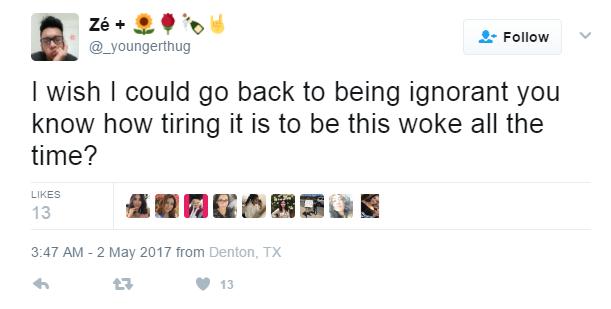 There is no shame in admitting emotional and mental fatigue from being hyper aware of injustice. Last summer I remember crying uncontrollably at my desk after the shooting deaths of Philando Castile and Alton Sterling.

These things hurt and they feel bad. When we consume and internalize all the injustices of the world around us, we can become scarred without even realizing. Unfortunately, the alternative seems somehow worse.

We have to be woke, but we also have to take care of ourselves.

People have been drawing links to anxiety and social media since the earth began to cool. CNN has reported that constantly consuming bad news can lead to stress disorders that require serious treatment.

When we see our anxieties, fears, and biases reflected back, expanded upon in detail, and reported to us by members of the movements we implicitly trust, we can become fearful and depressed. It's not bad to be aware of these things. It is harmful to surround ourselves with these traumas without giving ourselves time and space to decompress.

You can't sit on twitter pouring over hot takes five hours a day. You can't wake up first thing in the morning and look at the new nonsense that happened when you were asleep. You can't meet with your loved ones and only talk about politics and pain.

Yes, there is such a thing as being "too woke". But, no we don't combat it with less knowledge.

Alongside our fear of regressive policies that threaten the things we love most, we have to find a way to take care of our mental health; to remain powerful and steadfast in our knowledge and radically defiant in our expressions of self-care. The pain that comes along with the responsibility of wokeness is unavoidable. How we combat the emotional fatigue of these times is up to us.