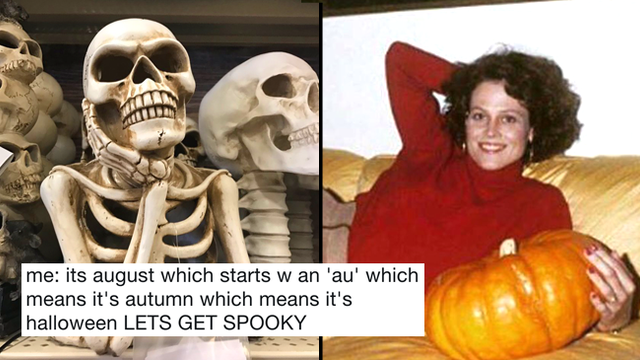 As we all know, Halloween is not just a date or a holiday. It's a state of mind, it's an aesthetic... it's a GOD DAMN lifestyle. At time of publication, there is 76 days until Halloween. That's exactly 1824 hours. 1824 hours for you to plan and source your costume, attempt to make plans with your friends and of course, retweet every single one of these painfully accurate tweets.

1) When Satan decides to you bless you twice in one month.

When you find out that there will be a Friday the 13th in October pic.twitter.com/vhVcO5HByp

2) Longest, most excruiating wait of your life.

me waiting for Halloween pic.twitter.com/KEMI9H8bnX

3) When the temperature hits below 17 degrees and there's like, one cloud in the sky.

Me: *feels a slight cold breeze outside*

Me: thinkin about how Halloween decorations are back in stores and the greatest day is only a couple months away pic.twitter.com/CWVGrkRTLj

halloween is in less than two months pic.twitter.com/rdLntgArGw

When everyone is enjoying summer and you're just waiting for fall pic.twitter.com/scdNfiFyg4

I AM SO READY FOR HALLOWEEN ITS AUGUST AND I'M FEELING SPOOKY pic.twitter.com/uBRGCH7td9

9) Did you know? The 'S' in August also stands for SPOOKY.

10) "Do not pity the dead, Harry. Pity the living. And above all, pity those who believe Halloween is only for one day."

you, a poser: i can't wait for halloween
me, the Pumpkin King: halloween is a lifestyle. i wake up every day and it's halloween.

When all the Halloween decorations start popping up in the stores pic.twitter.com/kGWejMAo80

When it's mid July and all you can think about is Halloween pic.twitter.com/bUJV9otfYM

me whenever someone mentions halloween pic.twitter.com/2pcpaiQQao

me from the middle of August until Halloween https://t.co/9Dl7lyu4hm

*sees 1 Halloween store that's not even open yet*
me: pic.twitter.com/xXvVIJsDS8

when u watching everyone make super lit Halloween plans and it's your fave holiday but u still don't got plans pic.twitter.com/pxQEFObL2Y