Iceland's President Just Made Pineapple On Pizza An International Incident 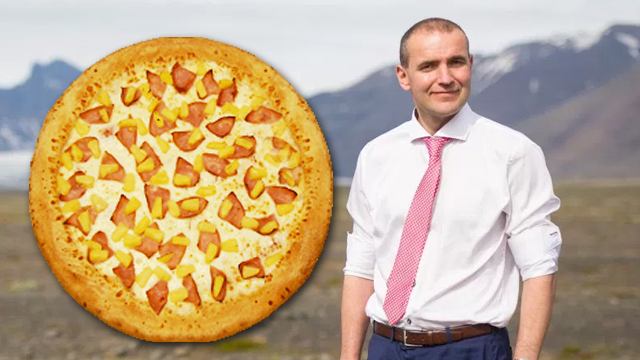 Why can't we all just let this debate go?!

The dust has only just cleared from the last time the internet clashed over pineapple on pizza - and as you probably know, there were many casualties.

But at last, whether you enjoy the topping as a delicious sweet kick to your 'za or not, we've been able to put our differences aside; and focus on the greater issues of the world.

The President of Iceland, Guðni Th. Jóhannesson, has apparently been eager to get into some major discourse. Speaking at a local school in Akuyeri, Jóhannesson took questions from the students - one of which quizzed his stance on the Great Pineapple Controversy.

Jóhannesson not only said he wasn't a fan; but that if he had the power to pass laws, would impose an Iceland-wide ban on the delicious topping option like some kind of f*cking demagogue.

Twitter has rightfully decided that the President of Iceland is now cancelled.

good morning to everyone except the president of iceland https://t.co/DasXXWwncf

Well the president of Iceland can go fuck himself pic.twitter.com/dXvy8tpb8H

Except for those who agree with his vicious statement.

Trump over here ruining the country and Iceland's president is tryna do God's work by banning pineapples on pizza.

Even Iceland ~the shop~ is weighing in.

Don't worry pineapple lovers. You can still get them on a pizza in Iceland (Foods)

And so once again, the war is back on.

In the wake of Iceland's first political controversy in a good long while, Jóhannesson has been forced to take to Facebook to clarify his position; admitting amongst other things he is "glad that [he does] not hold such power" to implement a pineapple on pizza ban, and recommending people try seafood on pizza. BIG NAH.

All we know is, regardless of your position on the subject, we're all feeling a bit sweet n' salty this morning.