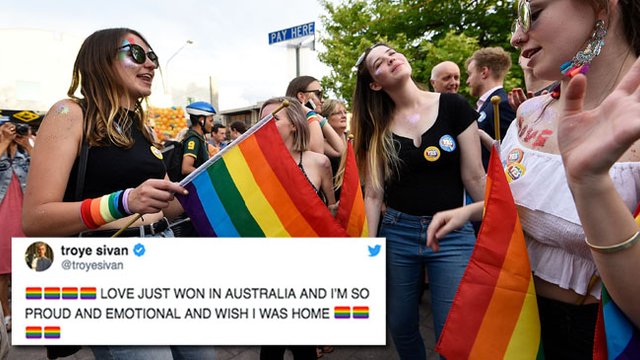 Troye Sivan, Lauren Jauregui and Hayley Kiyoko are among the high profile figures sending their love as Aussies take to the streets to party.

In a landmark ruling yesterday (November 14th), Australia has voted to legalise gay marriage, with 61.6% of voters backing the motion after a three month campaign.

Celebrations are now taking place across the nation, with thousands of people gathering in the streets of major cities including Sydney and Melbourne as the Prime Minister, Malcolm Turnbull, urges the parliament to commit to implementing marriage equality by Christmas this year.

Australian celebrities and other well known figures have been taking to social media to congratulate the country on the news. Here are just a few of the many messages that have poured in so far:

Yes!!!!! Congrats Australia! Every step taken is one closer to World Peace! Love love love you! Proud to be Australian by association lol pic.twitter.com/1zO5kSjMS7

Incredible news. #MarriageEquality so happy for my friends down under.

First #marriageequality in Australia second the news about Mugabe in #Zimbabwe maybe next Trump will go on holiday forever. BEST WEEK EVER!

Good on ya Australia #marriageequality