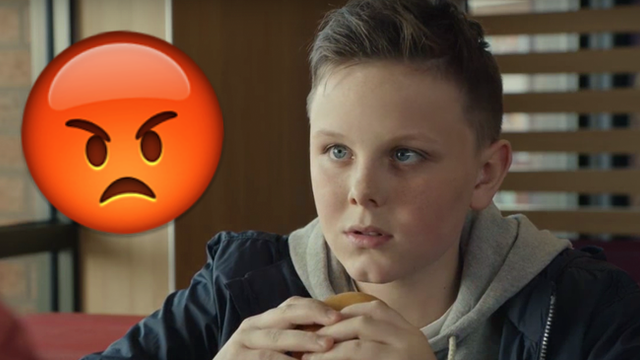 "It was never our intention to cause any upset."

Oh, McDonalds, what are you like? First you're trying to make us eat our Happy Meals with stupid 'Frorks' and now you've got in trouble for putting insensitive and exploitive adverts on the TV? Are you ok, hun? Have you been hanging out with Pepsi too much? Do you need a hug?

Anyway, this commercial. Yes. The commercial in question first aired in the UK last week and has since received a bucket load of complaints about the messaging it contains. The storyline involves a young boy asking his mother about the father he lost. She goes through all his dad's qualities, pointing out that he has nothing in common with him. The duo then end up at a McDonalds where he orders his deceased dad's favourite meal.

Watch the advert for yourself below:

The ad is splitting opinions. A lot of people are saying it "exploits bereavement" and "shamefully" uses a child's grief to sell burgers, while others can't see the problem.

Just cried my eyes out at the McDonalds advert. Absolutely FUCK YOU for exploiting the idea of fatherless children you over salted WANKERS.

I genuinely don't think I've ever seen anything as cynical and exploitative as the new @McDonalds advert. Shameless, even by their standards

New #McDonalds advert, cynically using the story of a kid's dead dad is trashy beyond belief. Who needs 2 parents when you have McNuggets?

Eventually, McDonalds decided pull the advert and not to continue to air it.

In a statement to Digital Spy, McDonalds addressed the backlash against the advert by saying: "We can confirm today that we have taken the decision to withdraw our 'Dad' TV advert. The advert will be removed from all media, including TV and cinema, completely and permanently this week.

"It was never our intention to cause any upset. We are particularly sorry that the advert may have disappointed those people who are most important to us – our customers."

@RockinVoodoo We’ve listened & decided to remove our ‘Dad’ TV advert from Wednesday 17th May. We apologise unreservedly for any upset caused