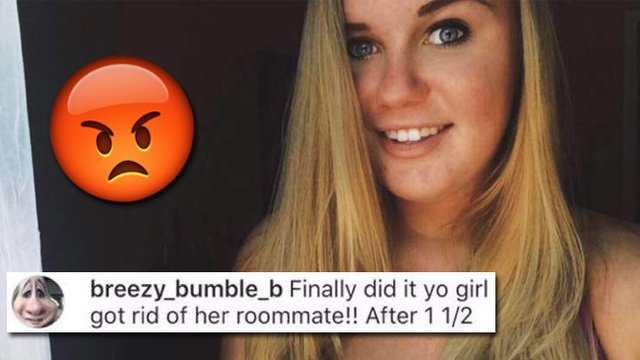 Brianna Brochu is now facing trial and has been expelled from her university following the disgusting revelations on social media.

A student University of Hartford in Connecticut has been charged with "criminal mischief" this week after doing some truly terrible things to her roommate...and then bragging about it on Instagram.

Brianna Brochu, 18, posted on social media about how she spent over a month "spitting in her coconut oil, putting moldy clam dip in her lotions, rubbing used tampons (on) her backpack, putting her toothbrush places where the sun doesn't shine, and so much more" while referring to the roommate as simply "Jamaican Barbie". Basically, if it wasn't already obvious, Brianna sounds like a truly awful excuse for a human being.

Thankfully, her poor unsuspecting roommate, Chenel Rowe, who goes by Jazzy on social media, discovered the post and reported her to the police. The University have also expelled Brianna with the principal publishing a strongly worded letter condemning her actions.

Jazzy was already moving out of the accomodation after feeling sick and suffering throat pain due to what we now know were the horrible actions of Brianna. Jazzy detailed her ordeal in a livestream on Facebook and has since received huge amounts of support on social media, using the hashtag 'Justice For Jazzy':

I don't even know how I would react in that situation. It's honestly so crazy what hatred can lead people to do #JusticeForJazzy

Jazzy also posted on her Facebook page about how she believes race came into play in the situation and the struggles she still faces:

Brochu appeared in court on Wednesday and the case will continue on Nov. 15. Police have also added "intimidation based on bigotry or bias" to her charges.

Grammys called out for nominating Dr. Luke in spite of Kesha allegations

QUIZ: Are you more Little J or Jenny from Gossip Girl?

QUIZ: Will you be single or taken in six months?

QUIZ: When will you next have sex?