21 Celebrities Who Are Speaking Out Against Trump's #MuslimBan 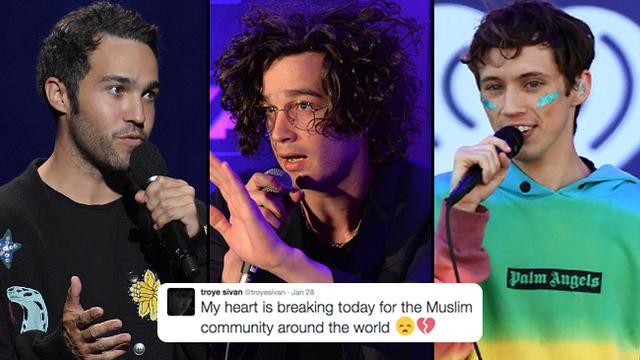 "Not saying every celebrity has to be an activist but..."

News broke on January 28 that President Trump has ordered a "Muslim Ban" on immigrants and refugees trying to enter the US.

The executive order is not a ~complete~ ban on Muslims from the US. It states that residents and dual nationals of 7 specific Muslim-majority countries (Yemen, Somalia, Iran, Iraq, Libya, Sudan and Syria) in the Middle East will not be permitted to enter the States for the next 90 days. Refugees fleeing war-torn countries will not be permitted to enter the US for the next 120 days.

Celebrities have reacted to the news in their droves, here's what they had to say:

This has zero to do with national security it is blatant and pure xenophobia and Islamophobia @realDonaldTrump. Not only cruel, ILLOGICAL!!

I try to keep my politics off of twitter, but the ban on refugees is disgraceful. Please refer to the Statue of Liberty. I love you all.

I can't find the words.

Coming soon. All proceeds will be donated to the @aclu_nationwide -- We believe that ALL people from all walks of life deserve equality and fair treatment in this amazing country. We must continue to fight. A special thanks to @andrewstephencook for designing this with me. Stay tuned, stay hopeful. We love you.

when i was 15 i didn't know how to call a representative or protest efficiently, but every kid does now, whichever side they're on

the amount of hatred and fear radiating from this administration is already hard to bear, but we have to stay informed and stay outraged

help our queer & immigrant friends. send me your donation receipts for the @aclu & I will match up to $100K https://t.co/P9zVRH0WH0 #RESIST

Sick to my stomach today about the #MuslimBan
Don't understand why? Go to @Stl_Manifest & learn the awful history of US rejecting refugees

THESE are the HUMAN BEINGS Trump banned today. REFUGEES fleeing ISIS. Children. Their families. Shame on him. May God help us. https://t.co/6fHeqEAaMj

Disgusted! The news is devastating! America is being ruined right before our eyes! What an immoral pig you have to be to implement such BS!!

Nothing "tests" my faith like watching some politicians rip our nation apart in the name of Jesus-who, btw, would NEVER stand for this. https://t.co/jSPYifgOF0

Not saying every celebrity has to be an activist, but am saying accountability culture exists and pretending nothings wrong will only hurt u

. @realDonaldTrump it's super funny how bad of shape you're in considering how many people wanna fight you. Jus sayin

When I worked for Amnesty International in the 80s, these were the kind of stories told by political prisoners in dictatorships. https://t.co/y7CXLQK1n0

Olly Alexander (in regards to Uber's stance on the ban.)

James McVey from The Vamps

So have Muslims, Jews, Sikhs and many more innocent people. What do we all have in common? We are all HUMAN. @realDonaldTrump

Say it loud. Say it clear. Refugees are welcome here.