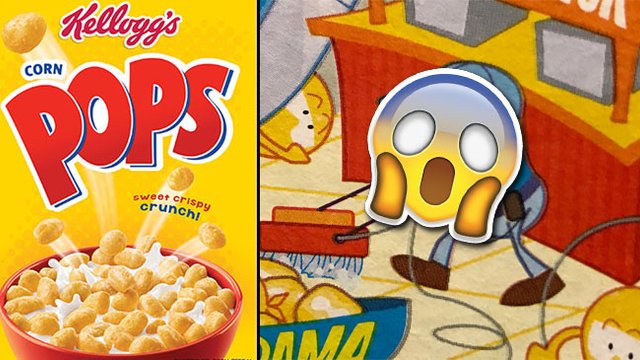 Kellogg's have promised to alter the box in a message to angry customers on Twitter.

Kellogg's have apologised and promised to change up the artwork on one of their boxes after it was called out online for pushing racist stereotypes.

The cereal Corn Pops currently features box art of a whole city of characters made of the cereal going about their daily business. Some are in a mall, some are playing video games and some are just hanging out in a fountain full of milk.

But, as Twitter user Saladin Ahmed pointed out, there is a clear problem with the picture as, for some reason, the only darker coloured piece of cereal has been given the job of a janitor:

hey @KelloggsUS why is literally the only brown corn pop on the whole cereal box the janitor? this is teaching kids racism. pic.twitter.com/Nh7M7IFawW

yes its a tiny thing, but when you see your kid staring at this over breakfast and realize millions of other kids are doing the same…

After Saladin's initial tweet went viral, Kellogg's responded and promised to change the artwork as soon as possible:

Kellogg is committed to diversity & inclusion. We did not intend to offend – we apologize. The artwork is updated & will be in stores soon.

So while it is pretty messed up that this happened in the first place, at least the company have been prompt in their response. Updated boxes are expected to be in stores in the US shortly.