They miiiight wanna rethink this one.

Sometimes it pays to be clever. Companies are always looking for ways to spice up everyday products with cute visual marketing. Sometimes these attempts pay off. Other times they can just be a bit awkward.

One Reddit user posted a photo of condoms that were being distributed around their campus as part of a safe sex campaign.

Can you spot why these condoms may need a little redesign? 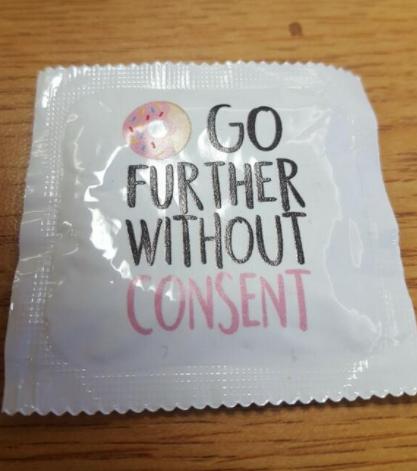 We've all read about how emoji-speak may one day evolve into an official language, but this emoji usage just makes things a bit awkward.

Most people were VERY confused.

Other people pointed out the other bad ways this could be interpreted.

And some people made helpful suggestions on how to simplify the design.

Moral of the story? Cutesy designs can sometimes make things a bit complicated.

For the record, consent is super sexy and ESSENTIAL, even if that message gets a bit lost in the sauce here.

And, for those who like this design, you can buy the condoms at Say It With A Condom. Admittedly, their commitment to opening up the conversation around consent is admirable. It's still confusing as heck though.