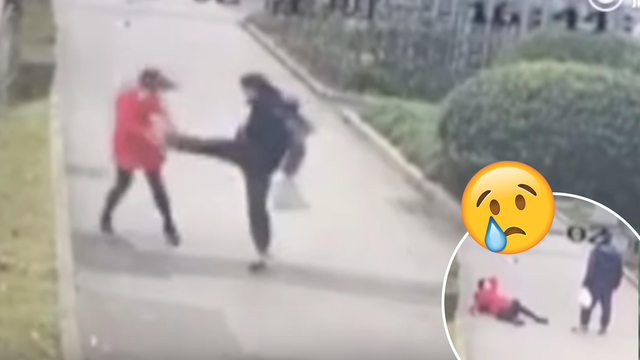 WARNING: Some may find this video disturbing.

School can be a challenging place. Differing viewpoints can sometimes cause intense debates and discussions among classmates. Usually, we can all take in-class disagreements with a grain of salt and move on, but one female student in China is learning that it's not always easy for people to let things go.

CCTV footage has revealed disturbing images of a Shangai University of Sport student attacking a female classmate after a lively in-class debate.

The man can be seen kicking his classmate multiple times and shoving her roughly to the ground. Brief verbal exchanges are punctuated by this male student's outbursts of rage in these shocking images.

Warning: Some may find this video disturbing.

Many on social media have commented that this attack was "truly despicable" and "cowardly", with many calling for a harsher punishment for the student, who will apparently not face expulsion for his actions. The male student was only ordered to apologise for physically attacking another student on campus.

Despite this horrifying footage, women should never be afraid to speak their mind in class or in a professional setting. Educators and

This university should absolutely not have advised a student not to go to the police and anyone found attacking another student should be immediately removed from further study.

Got some thoughts on this? We want to hear them. Sound off in the comments below!