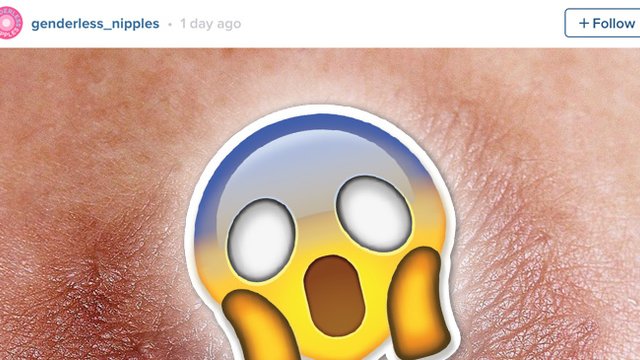 You probably remember a while ago when Instagram (and Facebook) caused a scandal by allowing men's nipples on their site but BANNED women's nipples. That was some serious patriarchal, sexist BS right there.

Why are men allowed to proudly show off their nips while the girls have to cover up? It's 2016. We all have nipples. Let them live ffs! Well, one Instagram account is taking on the good fight in the best way possible.

'Genderless Nipples' was started this week and it does exactly what it says on the tin: it posts pictures of people's nipples without any gender-identifying features.

There is no wrong way to have a body. - Glenn Marla

Is it a male or a female nipple? WHO KNOWS. If Instagram can't identify which nipple is female, surely they cannot remove the image, right?

Equality hurts no one, so why hinder it?

What if they're genderqueer? What the f- are you going to do about it Instagram?

Dear Instagram, why don't you try and figure out which nipples you can and cannot delete? Good luck!

It hasn't been without its troubles. It looks like Instagram has already taken down a few pictures - not that they guessed their owner's gender correctly!

NEWS: We just had one of our male nipples removed. Instagram, you can't even tell the difference between male and female nipples; who could!? So why even bother banning female nipples if they can be so similar? Ps. Thanks everyone for returning tonour account, Instagram activated our old account again. What's up Instagram? What do you think?! @genderlessnipples

For now, the account is still posting glorious nipples pictures and they are calling on Instagram to change it's policy so men, women and people of all different gender identities are treated equally. You can also submit your own nipple picture, if you feel inclined to do so. Although don't be doing that if you're under 18, okay? That's illegal and you will get into serious trouble - just a heads up!

There is a distinction between biological sex and the social construct of gender. You wanna be part of our change? Send us your nipple! To get featured please take a reference from our pictures on the account currently: -good light -sharp -from a “coke can” distance we still crop it -shaved (to make it extra hard for instagram) -direct the nip straight into the camera