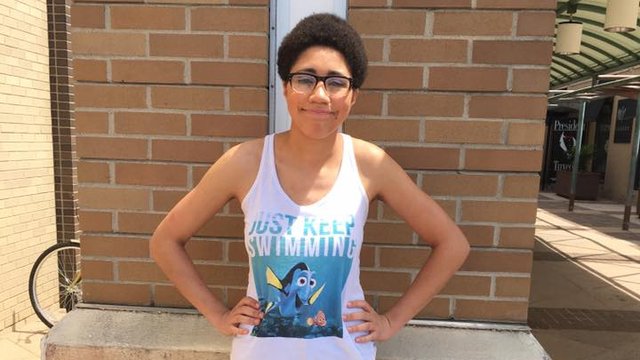 Strict school dress codes that single out young women are not a new phenomenon. But what about those who police young women in public spaces with impossible and subjective standards?

Hannah Pewee was enjoying a weekend trip the Woodland Mall in Michigan recently. The weather that day was 90F degrees (32 degrees Celsius) and Hannah was doing her best to stay cool.

While wearing what can only be described as a super normal outfit for a hot day, Hannah was approached by mall security and informed that she would have to leave the premises because of how she was dressed.

Hannah posted more about the incident on Facebook and people are definitely on her side.

Despite being dressed in a Finding Nemo tank top and casual shorts, an anonymous complaint prompted a mall security guard to request that she leave the mall.

In her Facebook post, Hannah also wrote about the outdated practice of slut shaming girls. "It's my body, and it's hot outside! I'm not going to show up in jeans and a sweater, sorry. Don't like it? Look away! I was out having a fun time with my sister and next thing I know, I'm out on the street. Slut-shaming how girls are dressed is deplorable and outdated, and it needs to stop."

Hannah points out that she was not the only person dressed that way but she was the only one asked to leave.

After Hannah posted about the incident on Facebook, she was contacted by Woodland Mall management who informed her that they would be looking into better ways to handle future situations like her's. The mall's website previously did not have a detailed dress code policy, so it is pretty outlandish to assume that customers know what specific mall officers deem "inappropriate".

The reality is that sometimes it's unbearably hot. The amount of times I've seen shirtless men in very public spaces with no repercussion should tell you how strictly women are monitored and policed for their clothing.

We hope Hannah is okay after the incident and we also hope that this mall and others can be reasonable with regards to their warm weather dress code policy.