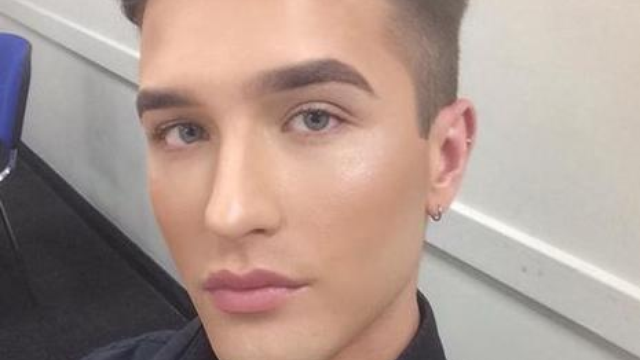 Okay, but his brows are literal perfection.

Before you read any further, let's just clarify one thing. Makeup is not exclusively for women. In fact, makeup is an art form that is for anyone. Scott Ayton-Laplanche loves wearing makeup, but a recent experience at work involving his look made him so annoyed that he just had to vent.

Scott starts off by clarifying that his workplace does not have a makeup policy.

Scott says that many women he works with wear a fair amount of makeup. His love of makeup was apparently not a problem until his workplace came under new management and he was told to remove his makeup and "tone it down."

Scott explained his situation on Facebook and delivered what might just be the greatest clap back of all time. "I was quite shocked... After I refused, I'm getting told to tone it down? Excuse me? Tone it down? You can't tone down a masterpiece."

Scott's look isn't even over the top. His brows are heavenly, highlight is poppin', lips are enviable, and skin is off the chain.Despite all that, he is certainly not doing anything that would be considered "too much."

Scott's post has been shared over 3k times, with 19k likes since last week. The great majority of the comments are supportive and complementary.

He ended his post by explaining that summer was a time for pride.

"This is 2017, a time of year where we celebrate Pride throughout summer and I look hella hot so deal with it! It's wrong to blatantly discriminate for whatever reason that may be."

Scott's employer, Currys PC World has since issued a statement via HuffPo UK saying, "This was a local store level misunderstanding that is being dealt with internally. Scott takes pride in his appearance and Currys PC World is proud of its diverse workforce."

Individuals may not always understand diverse artistic expressions, but we're glad that people and many companies have embraced the different ways we choose to be ourselves. Keep it up, Scott. Your look slays!