WTF? These Teenage Girls Just Got Banned From A Flight For Wearing Leggings 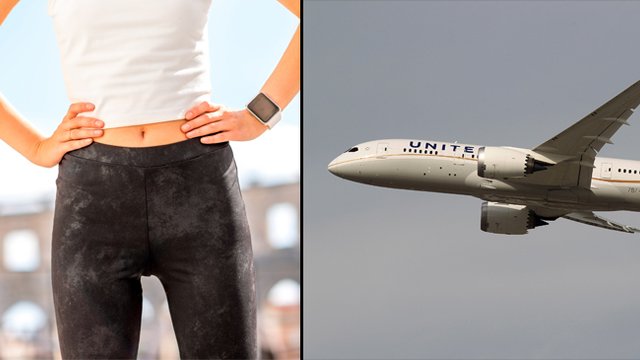 United Airlines have come into some serious criticism on social media for their dress code policy.

United Airlines have defended their dress code policy after banning several girls from a flight for the clearly terrible crime of, um, wearing leggings.

Two teenagers and a ten year old girl were waiting to board a flight from Denver to Minneapolis but were turned away at the gate for failing to follow the airline's dress code. The younger girl was able to change into a dress and board the plane with her parents, including her father who was wearing a pair of shorts but never questioned. Meanwhile, the other two passengers were denied entry and had to wait for a later flight.

News of the incident quickly spread across social media after a fellow passenger took to Twitter to show her anger.

1) A @united gate agent isn't letting girls in leggings get on flight from Denver to Minneapolis because spandex is not allowed?

However, despite widespread outrage, United remained defiant, standing behind the decision of their gate agent.

Turns out the family in question were "pass travellers", a company benefit for United employees that allows them to travel for free as standby passengers. "Pass" travellers are therefore treated as company representatives and expected to adhere to the stricter dress code that includes no "Lycra and spandex leggings, tattered or ripped jeans, midriff shirts, flip-flops or any article of clothing that shows their undergarments".

So yes, ok, technically they broke the rules here - but are we really going to start telling 10 year olds in leggings to feel ashamed and embarrassed about that? Seems pretty extreme right? It's just leggings.

The debate continued to escalate on social media throughout the weekend:

I have flown united before with literally no pants on. Just a top as a dress. Next time I will wear only jeans and a scarf.

Hey @united, are "leggings" really the hill you want to die on? An apology and "my bad, here's some miles" seems like a better route

But there were also those defending the company as the dress code, right or wrong, has clearly been in place for a while:

@Reuters worked for @united for 7 years, there has always been a dress code for employees traveling on discounted pass.

I don't get the outrage. You're traveling on an employee pass that carries a dress code? Follow the dress code. #united #leggings

Sooooo many better things to be upset about. @united saying "here's a free $400 flight, just follow the dress code" isn't one of them

So what do you guys think? Who is in the wrong? Let us know your thoughts over on our Facebook page.