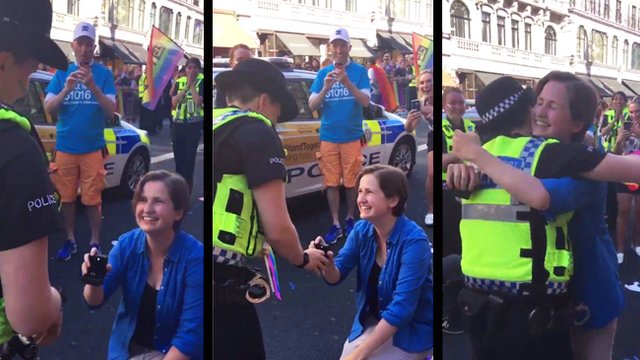 Incoming: direct hit to the feels.

This weekend saw the annual Pride celebrations take place in London with an estimated 1 million people turning out to watch the parade and join the street parties in Central London (we were there and it was the probably the most fun we've ever had at London Pride). And it was even better for one couple who got engaged during the parade and now the proposal video has gone viral.

The parade features many different organisations - from small community groups to giant corporations - and this year the Metropolitan Police, London Ambulance Service and London Fire Brigade were asked to launch this year's Pride as a mark of respect for their acts of bravery following the recent terror attacks and the Grenfell fire tragedy.

And it turned out to be an even more special day for an on-duty member police woman as her partner got down on one knee to pop the question in front of the whole parade. Thankfully, she said yes!

The moment was captured by the British Transport Police on their Twitter feed and has since ranked up thousands of retweets and messages of support to the couple (who asked not to be named).