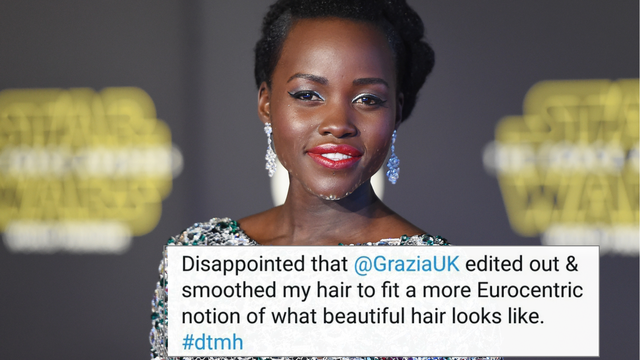 Why do magazines invite black women to be on their covers and then edit their black features?

Actress Lupita Nyong'o has called out fashion magazine Grazia UK for apparently editing her natural hair on its cover. In a tweet and a lengthy Instagram post, Lupita expressed disappointment that parts of her hair had been edited and smoothed "to fit a more Eurocentric notion of what beautiful hair looks like."

Disappointed that @GraziaUK edited out & smoothed my hair to fit a more Eurocentric notion of what beautiful hair looks like. #dtmh pic.twitter.com/10UUScS7Xo

Grazia UK has since denied making "any editorial request to the photographer for Lupita Nyongo’s hair to be altered, nor did we alter it ourselves."

This is a fancy way of saying 'these are the photos we got back from the photographer and we’re not responsible for any editing that may or may not have taken place.'

This isn’t the first time a UK magazine has been called out for publishing an edited version of a black celebrity’s hair.

Less than a month ago, Solange Knowles revealed that the Evening Standard had airbrushed her braided halo of hair out of their cover photo.
Yes, they really did this to a woman who wrote a song called "Don’t Touch My Hair".

Evening Standard said the editing job was done for layout purposes, but admitted they’d "made the wrong call".

Black women have been on the receiving end of this treatment for years. Stars like Kerry Washington, Gabourey Sidibe, and even Beyoncé  have had their black features lightened and altered on the cover of major magazines.

Magazines continue to invite these talented women to grace their covers but aren’t always prepared to offer dark skin and kinky haired beauty to their audiences.

In a lengthy Instagram caption, Lupita explained why it is important that her appearance not be altered in this way.

"As I have made clear so often in the past with every fiber of my being, I embrace my natural heritage and despite having grown up thinking light skin and straight, silky hair were the standards of beauty, I now know that my dark skin and kinky, coily hair are beautiful too. Being featured on the cover of a magazine fulfils me as it is an opportunity to show other dark, kinky-haired people, and particularly our children, that they are beautiful just the way they are." 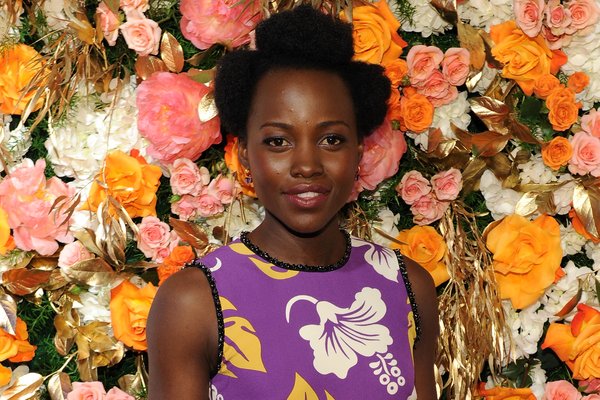 Too many black girls move through the world feeling unseen and unrepresented. I, myself, did not grow up with women like Lupita on magazine covers. I did not have the opportunity to see women on the cover of magazines with hair textures similar to my 4c hair or with skin like my own deep brown skin.

Magazines that smooth out Lupita’s hair and lighten her skin need to know that they are depriving young black girls the opportunity to see women who look like them proudly embrace their beautiful features.

Next year, Lupita Nyong’o will appear in a film with a majority black cast. This film does not tell the story of oppression or slavery, for once. It’s a film about heroes. Black heroes.

So, as magazines put her on their covers and praise her incredible poise, they should also allow her to be a real-life black hero. Magazines should allow Lupita to show young girls who look like her that they are beautiful the way they are.

This is why you keep getting headaches in quarantine

This is why you keep having weird dreams during quarantine

Ladies, abandoning your bra during coronavirus lockdown could make your boobs saggy

QUIZ: How gay are you, really?

QUIZ: Go on a shopping spree at Lush and we'll reveal your teen stereotype

QUIZ: We can guess your age based on your tattoo preferences