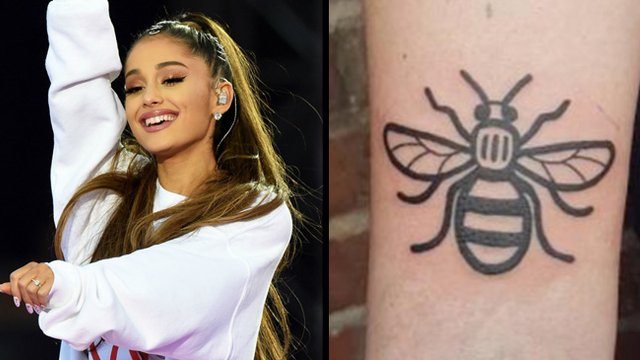 Ariana joins hundreds of others in honouring the Manchester victims with the bee tattoo.

UPDATE 6/06/17: As well as putting on the performance of her life at Sunday night's benefit show, Ariana Grande has continued her support for the city of Manchester and all those affected by reportedly getting a bee tattoo.

According to Metro, Ari and her team reportedly inked themselves with the bee, which is a symbol for the city of Manchester, at the Manchester Ink tattoo parlour following her hugely successful One Love concert. You can see a glimpse of one her backing dancers new ink here.

As the citizens of Manchester, England bravely unite around the victims of the recent Ariana Grande concert bombing, people started showing support for the city in many different ways. Tattoo artist, Sam Barber has launched The Manchester Tattoo Appeal to raise money for the families impacted by Monday's terror attack. Tattoo Shops all across Manchester are teaming up to give bee tattoos to anyone who wants one as a way to show solidarity.

"This Sunday 28th and Monday 29th, the tattoo artists of Manchester will be coming together and tattoing Manchester Bees for £50 to raise money for the families and victims of the terror attack at the Manchester Arena," says the appeal Facebook page.

The worker bee has long since been a symbol of the city of Manchester. Manchester earned itself a reputation as being a city of exceptionally hard workers during the Industrial revolution.

The worker bee is also included in the city's coat of arms.

The appeals page has been swamped with bookings, many in locations outside of Manchester. The Manchester bees are proving to be a creative way that everyone can get involved in helping the families impacted by this terrible tragedy.

If you or someone you know is interested in a Manchester bee tattoo, make sure to check the appeals page for all the updates on participating tattoo shops.

A post shared by This Mortal Coil (@thismortalcoiltattoogallery) onMay 25, 2017 at 1:57am PDT