Matty Healy Has Promised To Send Nudes If You Do This One Thing... 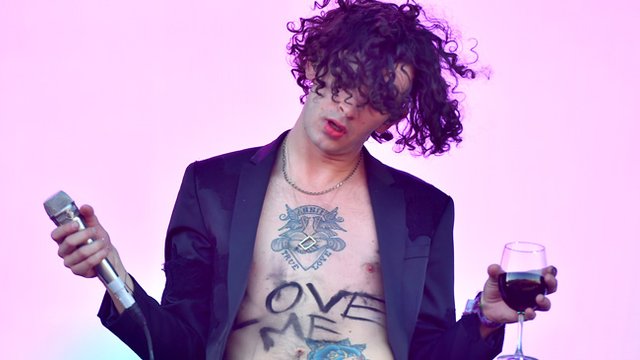 I like it when you send nudes, for you are so beautiful yet so unaware of it

Well if this doesn't make you vote then I honestly don't know what will. Matty Healy has announced that he will send you nudes if you vote for the Labour party in today's UK general election. *sweats*

The UK goes to the polls today to choose a new government for the next five years. The two main choices for voters are the current prime minister Theresa May from the Conservative party and Jeremy Corbyn from the Labour party.

It's no big secret that Matty is a Labour supporter (he's often criticised the Conservatives in interviews and on his Twitter) but as voters head to the polls, Matty decided to give that extra incentive to undecided voters. For the record, Matty, I'm voting Labour today...please hmu in my DMs, yeah?

Matty isn't the only celebrity urging people to go out and vote today. Perhaps unsurprisingly, most of the entertainment world is leaning towards the Labour party, which is proposing more left-wing policies. Though a number of artists, including Adele, have opted for a more neutral 'vote for anyone' approach. Whatever keeps those record sales high, eh?

Vote Labour. I don't know how to use my 'platform' in order to incentivise democracy. But vote Labour and I'll send nudes if that works

2. Adele is getting in on the action.

3. J.K Rowling has often criticised Jeremy Corbyn but she said she will still be voting for Labour today to keep the Tories out.

Election 2017: what should you do if you support Labour but can't stand Jeremy Corbyn? https://t.co/401tpwQLX5

4. Lena Dunham, who's American and therefore cannot vote, has nonetheless pledged her support to Jeremy Corbyn.

We here in America have watched in horror as our siblings in the U.K. have been attacked these past weeks and our president has been unable to offer so much as a word of condolence, only using this to push forward his racist and xenophobic agenda. We no longer have the option to pretend that what happens in Britain or America is separate. We do not live in fiefdoms. We must all work together to quell the tide of hate and complacency. Which is why, despite my US Passport, I desperately urge my U.K. friends/fans/frenemies to get out and vote for the Labour Party. With Jeremy Corbyn you have a chance at a fair and just leader who will temper the fascism and darkness of our current American moment. Thank you for considering, for getting your butts out there and for knowing- even when you feel abandoned by electoral politics- that your vote is all we have. This Thursday, June 8!

7. Ellie from Wolf Alice has been campaigning for Labour in the run up to the election.

The election on the 8th of June is a vote between the fair and the unfair. pic.twitter.com/QaPn8GB2g1

Please for the love of god #VoteLabour

If I can (convincingly) beat @anthonyfjoshua - surely today is The Day for underdog victory. #VoteLabour pic.twitter.com/lcd5tNf28E

For the NHS hospital I was born in and the comprehensive school I attended. For the many, not the few. Illustration by @rebecca_strickson_illustration

11. Years & Years were out campaigning for Labour too.

Who will YOU be voting for today?