McDonald's Are Finally Releasing Their Sauces But There's Just One Catch... 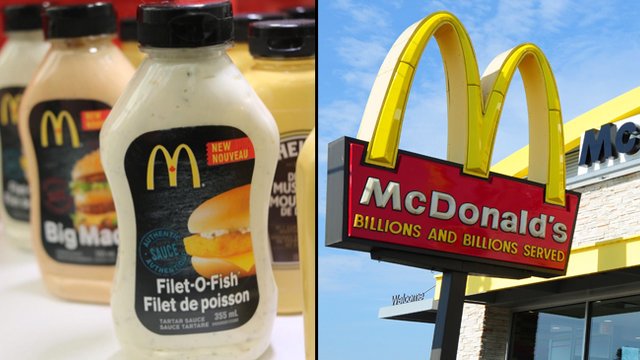 Wanna get your hands on Big Mac in a bottle? Here's how...

Your prayers have finally been answered junk food fans - McDonald's are bringing their special sauces into stores for the first time ever.

Yes, after years of begging, the company have announced that pretty soon you will be able to purchase your very own bottle of Big Mac, Fillet O'Fish and McChicken sauce to use in the comfort of your very own home.

Just one catch - it's only in Canada.

After the bottles were spotted at a Canadian food convention, Huffington Post reached out to Ronald and co. who confirmed the news:

"With this launch, Canadians will now be able to experience the world famous sauces they love at home. We look forward to sharing more details soon."

Previously the restaurants gave away bottles to a few lucky fans in the US which are now selling for over $100 on eBay. So, even if you ain't a fan of the golden arches, sounds like there will be a healthy demand on the blackmarket if you are interested in that sort of thing...

It's a plan fit for the Hamburglar himself.