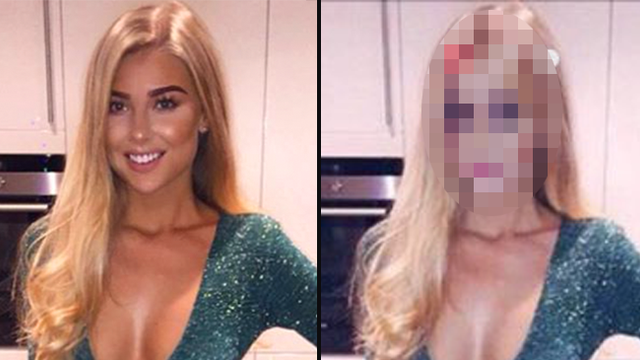 Have you ever been catfished? We like to think we'd be confident in our sleuthing skills to avoid ever being catfished but even this latest viral case of identity fraud has got us shook. The level of catfishing is so high that we're almost more impressed by it than we are creeped out.

Obviously, it's no laughing matter when someone steals your identity to pose as someone else online, so imagine how weirded out Jessica Hunt must have been when she discovered that very thing had happened to her.

Jessica discovered a picture of herself on someone else's Twitter but there was something VERY wrong about it...

OH MY GOD that is my body and my house but who's face is that!?!? catfish game is getting silly pic.twitter.com/a0fQagwi4q

Yeah, someone else's FACE had been expertly photoshopped onto her body. Take a closer look... they've lightened her skin tone to match the colour of their face and even managed to keep a little bit of her contour magic in there. Wild.

Everyone is freaking out about the extreme lengths this person has gone to to snag the perfect profile picture - including photoshopping their own versions.

Terrifying, truly. No word yet on whether the catfishing criminal got a match on Tinder yet either.