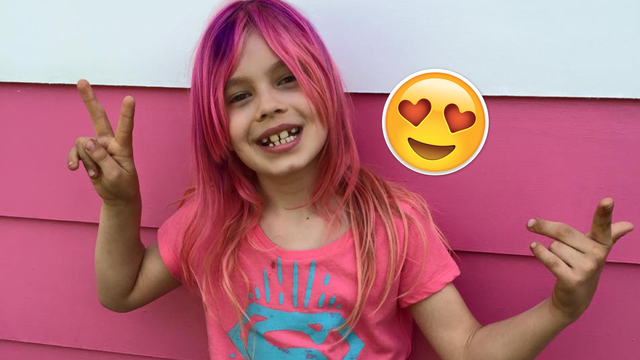 "The best thing about being a girl is, now I don't have to pretend to be a boy."

National Geographic has more than solidified its place as a culturally significant publication. We've seen some of the most thought-provoking covers from the iconic magazine and, now, 9-year-old Avery Jackson is about to make history as the publication's first transgender cover star.

Despite her young age, Avery has been a vocal campaigner for transgender rights and causes. In fact, Avery Jackson is so freakin cool, earlier in 2016, she helped raise money for a 'Transgender House' to be built across from notorious hate-mongers, Westboro Baptist Church. Pretty slick, sis.

Avery began transitioning when she was four years old and has been featured in media since her parents became vocal advocates for the rights of transgender children.

Avery will feature on the January 2017 cover of National Geographic as a star of the gender revolution. The special issue with two covers will explore "the changing landscape of gender". The gender binary, as we all know, is a complete scam.

Pink haired Avery appears on the cover above the caption "the best thing about being a girl is, now I don't have to pretend to be a boy."

Yep, right in the feels.

As Donald Trump prepares to take office in January 2017 alongside anti-LGBTQ+ VP-elect, Mike Pence, Nat Geo's decision to put Avery Jackson on their cover speaks volumes about the important and unyielding strength of progressivism.