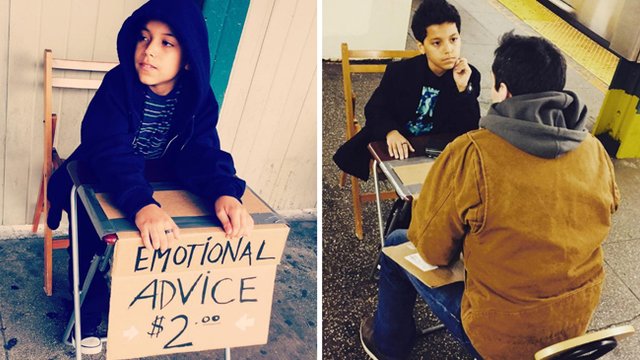 This kid is a genius.

Meet 11-year-old Ciro Ortiz, otherwise known as Emotional Advice Kid, who is helping to sort out the lives of stressed-out New Yorkers.

Ciro, from Brooklyn, has set up his own advice stool on the New York subway to help people with there problems. He's like the child version of Dr Phil only way cooler.

His emotional advice stand costs $2 per session and, quite frankly, Ciro is underselling himself because his advice is going down very well with his clients.

According to Ciro's dad, Adam, he was inspired to help his father make some money so came up with the idea of giving out advice for cash. The next day they went to Williamsburg and tried it out and people loved it.

It's been a roaring success. So far he's given out advice to nearly 100 people and he shows no signs of stopping.

Ciro told the Metro, "People ask about their relationships, about being confused in what to do with their life, or […] Donald Trump"

He has some sage words of advice for people struggling out there. "Try to accept change", he said. "Everything changes. We have to change too."

Sounds pretty good to us. Now if only Ciro had a hotline we could call for all of our life problems.