Ladies, There's Pool Float That Looks Like A Period Pad And Everyone Is Losing Their Minds 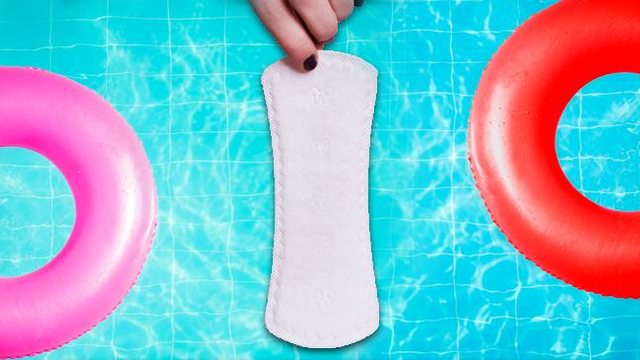 Because nothing says VACATION like a giant panty liner imho.

Time for your annual vacation! Have you packed everything? Do you have everything you need? Sunscreen? Check. Swimwear? Check. Passport, currency, sunglasses, headphones, a weeks supply of underwear? Check check check check check. A pool float that looks suspiciously like a maxi pad. Che---- wait, what?

Ladies, forget those Insta aesthetic flamingos and unicorns because someone has discovered a pool float that looks EXACTLY like a panty liner and everyone is losing their damn minds.

Focus group. This could have been avoided with 1 focus group (of women). pic.twitter.com/C76lv5ji33

It went viral on Twitter, everyone lost it and starting making the exact same jokes.

What's the absorbency level on this thing?

If you don't want to lose this on the pool deck, just pull off the adhesive strip on the back and attach it to your chair!

So it's apparently a thing at big box stores… pic.twitter.com/nT6LWCY4GR

Has someone made the surfing the crimson wave joke yet?

I legitimately thought that was a picture of a giant maxi pad dangling from the ceiling.

The model must be Photoshopped in, no way she saw that in real life and kept a straight face.

You would think the design has to be 100% unintentional, right? But the shape, the quilting and even the blue pattern that looks exactly like the demonstration they give you on those adverts to show you ~how~ they actually absorb the liquid look SO similar. Surely that would have never gone to production if there was a woman working on the project? Surely someone would have pointed out the obvious.

Oh and by the way, the Pasadena Pool Float is actually available to buy online for the reasonable price of $79.99.

Honestly, what a concept.