Ladies, A Man Has Invented "Period Glue” To Save You From The Inconvenience Of Tampons 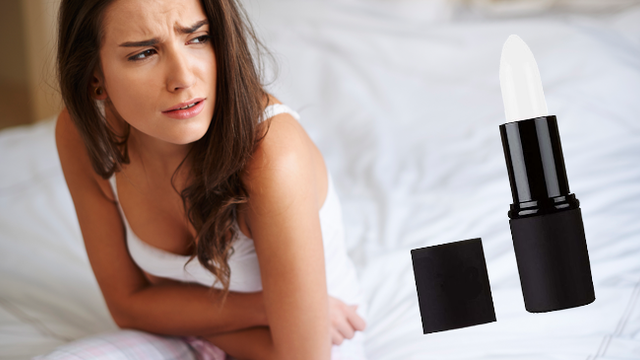 Apparently, women are "distracted" by their periods. And this is gonna solve it.

Men are amazing, aren't they? There's that ~little handful~ of them that always take one for the "team". They're always so thoughtful. What would we do without them and their invaluable opinions about our reproductive health? *sigh*

One certain man in particular has really stepped up to the plate and invented something that is 100% the most brilliant thing ever. This latest invention, aimed to "free women of the distractions caused by their periods", involves a discreet glue - that looks like a "feminine lipstick" because Christ, women f*cking LOVE lipstick, don't they? - that will HOLD YOUR LABIA SHUT during your period until you eventually go to the loo.

According to a Facebook post that has gone viral over the past few weeks, the product is called 'Mensez' and has been invented by the incredible Dan Dodds, who seems to think that women need an extra hand in "controlling" their periods.

The post reads: "Have you ever woken up with your lips stuck together? It didn’t hurt and it was kind of fun. All you had to do was wet your lips from the inside with saliva and they became unstuck. Mensez feminine lipstick is a natural patented compound of amino acids and oil in a lipstick applicator that is applied to the lips down under during the period. Urine instantly unsticks the labia and allows everything to wash out into the toilet, wipe and reapply Mensez lipstick. Clean, Safe, Secure and Done. Coming to a store near you soon."

But wait... it gets even BETTER. Dodds then continued to comment on the original ad for the product after initial backlash.

Dodds felt the need to back up his product by saying: "Yes, I am a man and you as a woman, should have come up with a better solution then diapers and plugs, but you didn't ... My dream is to have women free of the distractions, the psychological issues that goes along with their periods and see what they develop."

Listen, without getting too in to the graphic images that are already floating around in everyone's heads after reading that, anyone who has ever had a period knows that that is the most stupid idea anyone has ever had. And his wild comments on how a period can make someone incapable of thinking clearly prove that the period stigma is still real AF.

Oh, and just incase you wondering if this was a massive joke or some sort of #FakeNews (Sad!), it's not. Dodds has spoken to Forbes about his mind-blowing, revolutionary, genius, brilliant, spectacular, life-changing "feminine product" and it's also been registered on the patented list, but hasn't been made yet.