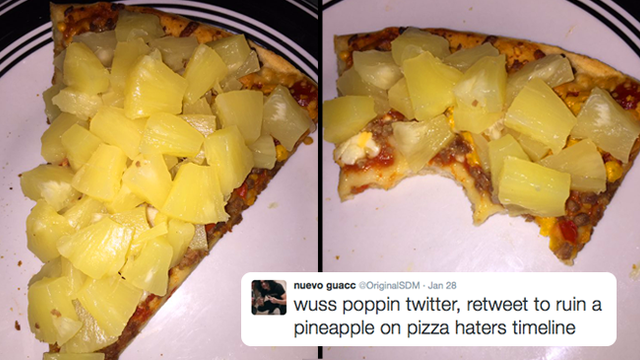 Fruit does not belong on pizza. The end.

You may have noticed over the past week or so that a tweet regarding the fiercely debated topic of 'Pineapple on Pizza' has gone somewhat viral. Started by @originalsdm, the tweet asks lovers of fruity pizzas to 'retweet to ruin a pineapple on pizza haters timeline'. It was both petty and offensive. Here's the tweet:

Over 100k people have since retweeted, meaning a lot of timelines have been tainted and ruined. Like these ones:

@OriginalSDM @Katman_31 @Katman_31 bro why you gotta ruin my whole day with this ? pic.twitter.com/ArPmgVwX63

The debate raged on, with many people coming to the defence of including exotic fruits on your savoury treat.

@meys @OriginalSDM LOL STOP HATING ON FRUIT ON PIZZA, TOMATOES ARE ALREADY THERE

Regardless of your stance on this very serious topic, can we all agree that there's way too much topping on that damn pizza anyway?

A quick head count of PopBuzz HQ indicates that the squad is 7 against 4 in favour of NO PINEAPPLE ON PIZZA EVER. Therefore, the law must stand. But what about the rest of you? Does Pineapple belong on a pizza? Yes or no?