Ladies, This Book's Description Of 'What Breasts Are For' Is So Wrong You'll Scream 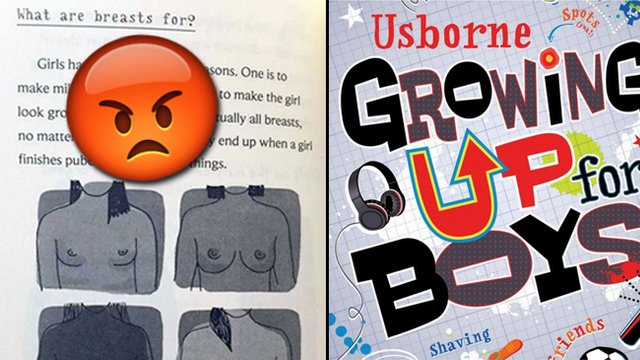 The publisher of 'Growing Up For Boys' has been forced to apologise after screenshots of the description went viral for the worst reason.

Book publishers Usborne have apologised after a screenshot of their book Growing Up For Boys went viral this week due to its pretty insane desription of a woman's breasts. Yep, you read that correctly.

The book, billed as a "frank and friendly book offering boys advice on what to expect from puberty", gained attention after writer Simon Ragoonanan posted a section on women's changing bodies on social media:

Wtf? From the @Usborne book 'Growing up for Boys': Girls have breasts for two reasons - feeding babies and looking grown-up and attractive. pic.twitter.com/r1I34eLlvK

ICYMI, here's the book's description of womens' bodies in full:

"Girls have breasts for two reasons. One is to make milk for babies. The other is to make the girl look grown-up and attractive. Virtually all breasts, no matter what size or shape they end up when a girl finishes puberty, can do both things."

'Grown up and attractive'? WTF is that all about? Is this an educational book or the ramblings of some sleezy older dude from a Woody Allen movie?

As Simon's original Facebook post went viral, the book received hundreds of one star reviews over on Amazon, the outrage ultimately forcing the publisher to release an apology to The Guardian:

"Usborne apologises for any offence caused by this wording and will be revising the content for reprinting."

Usborne have previously come under fire from the parent-run group Let Books Be Books who forced them to stop publishing pink and blue coloured activity books and have similarly criticised them for this new controversy too.

At the time of writing, Growing Up For Boys appears to have been removed from sale on Amazon and Usborne have promised a revised edition will be produced altering the language of certain sections.