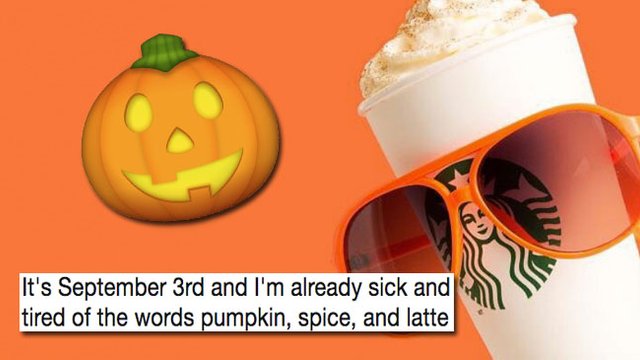 Starbucks' seasonal fave is back but not everybody is ready to let go of summer just yet.

It may only be the beginning of September, but apparently we are well into the Fall/Autumn trends already with Starbucks selling Pumpkin Spice Lattes and other assorted items to customers despite the fact that the weather would clearly suggest that it is still summer!

Tbf, that does look kind of tasty.

But we are not the only ones confused by the sudden arrival of this typically Autumnal flavour into the Starbucks' of the world - turns out even its biggest fans realise that if you are still stockpiling sun tan lotion and sleeping with the air conditioner on full blast, it is still the midst of summer.

Here's a few of our fave reastion so far to the grand return of the PSL (yep, we need an abbreviation for this now. Deal with it):

My thoughts on Pumpkin Spice anything. pic.twitter.com/IQY01jfxpc

You wanna know why it's so cold out? Cause all you bitches wishes summer away for pumpkin spice shit. Thanks. Assholes.

The worst thing about summer ending is pumpkin spice anything.

It's too early for pumpkin spice things, it's still summer, I need everyone to calm down

Treasure the next few days. it's not just the last days of summer, it's the last few days before pumpkin spice's assault on humanity begins.

Another bad thing about fall is that you have to listen to hordes of people pretend that pumpkin spice latte doesn't taste like sewage.

It's September 3rd and I'm already sick and tired of the words pumpkin, spice, and latte

Say "summer's over" before 9/22 and I'm going to dump your pumpkin spice latte on you & kick you in your no-no special place.