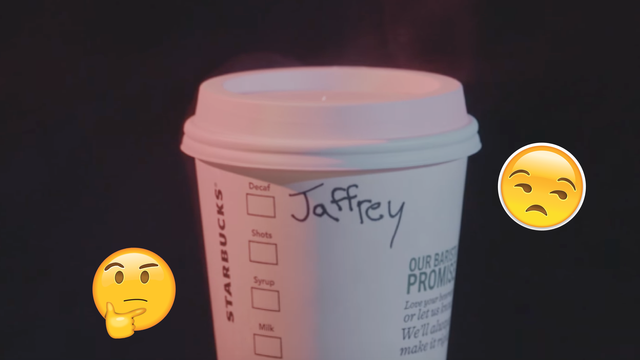 Do you buy it?

You've certainly experienced it. A Starbucks barista takes your order, asks your name, and writes down what can only be described a masterful butchering of a fairly common name. "Jessie" become "Jasee", "Jane" becomes "Jam". And don't you DARE try to have a fairly uncommon name because then it's lights out, fam.

All this time you thought it was an honest mistake. Or maybe that Starbucks is a particularly noisy venue for baristas. Nope. YouTuber collective, Super Deluxe, have theorized that something much more...sinister is at play here.

What if I told you that baristas were using badly misspelled names to constantly end up on social media feeds and subliminally condition you to buy Starbucks? Totes hard to believe, right? Right??

Now, we tend to leave the conspiracy theories to the pros. But this really adds up.

Okay, full disclosure: Super Deluxe is definitely a joke YouTube channel who make funny and absurdist videos BUT, they're not the first people to come up with this theory.

@ischafer I'm convinced that misspelling names is a marketing ploy by @Starbucks. EVERYONE posts pics of their cups with misspelled names

What's the most janky way Starbucks has ever screwed up your name? Tell us in the comments below. We're always up for a laugh!