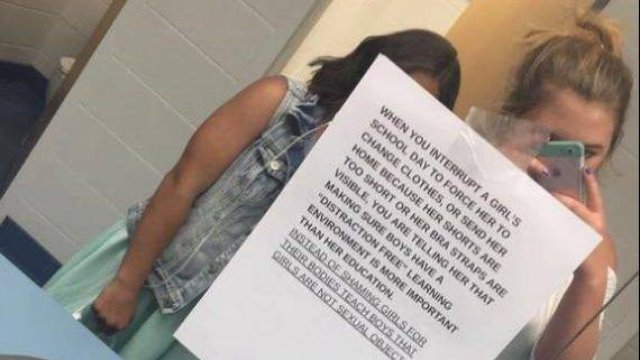 Breton High School in Canada has seen a huge war of words break out over its outdated rules on unifom.

A group of Canadian school students have hit back at staff, posting a protest sign in the girls' bathroom against the imposed rules surrounding uniforms.

Breton High School currently has a dress code that includes stipulations around the visibilty of bra straps and cleavage:

1. All shorts/skirts must exceed the length of arms/fingers and the in-seam to shorts must be the minimum of one hand length.
2. Straps for shirts must be three fingers wide for males and females, and bra straps must be covered.
3. All navels must be covered.
4. Cleavage must be covered.
5. Pants/Shorts must be pulled up so that boxers/briefs are not exposed.
6. Images/words on tops/bottoms must be appropriate for a professional learning environment.
7. Hats are not permitted on either gender in school unless it is a designated "School Hat Day."

CNN reports that a group of students posted a message in the bathroom that quickly spread on social media: "When you interrupt a girl's school day to force her to change clothes, or send her home because her shorts are too short or her bra straps are visible, you are telling her that making sure boys have a 'distraction free' learning environment is more important than her education. Instead of shaming girls for their bodies teach boys that girls are not sexual objects!!!"

Unfortunately, because teenage boys can be...well, teenage boys, a response soon appeared in the boys' bathroom too:

"When you wear little to no clothing and dress provocatively because it's 'too hot out' or because you think it's 'attractive,' you are putting boys at risk of having a distracting working environment and saying 'Your clothing is more important than their education.' Instead of dressing like a THOT, value the male education and dress conservatively."

Subsequently, the school staff were forced to comment, Wild Rose School Division superintendent Brad Volkman telling the Edmonton Journal that the school's principal addressed students on the subject, asking them to be more "respectful" and cut out the name calling nonsense.

However, he did also note that the school is "open to starting a dialogue about the dress code and that the student and parent advisory councils will likely revisit the policy this year".

So, hopefully the local district will follow the example of other school's around the country and finally bring their dress code into the 21st century.