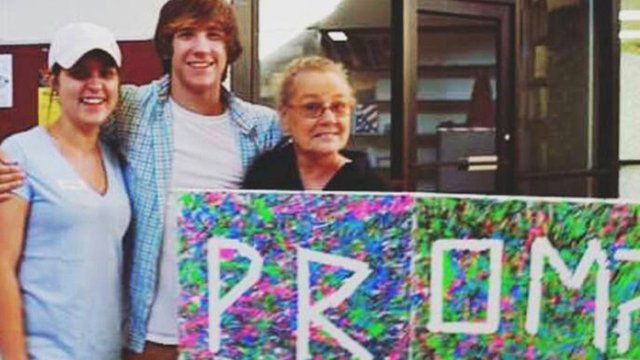 A student from Alabama was given a pretty lame reason why he can't bring his Nanny to prom...

A teenager in the US has been banned from bringing his Grandma to prom after teachers complained, prompting a mass outrage from students online.

CNN reports that Bryce Maine of Eufala High in Alabama invited his Grandma after finding out that she had never attended her own school dance, but the gesture was quickly shut down by school administrators over fears that she might buy booze for the underage kids. Current policy states that nobody over the age of 20 can attend due to this reason.

Furthermore, staff expressed concerns that this could lead to students in future years bringing their own Grandparents along as a joke. Really?

Bryce's sister posted about the decision on Facebook with her comments quickly going viral as students called out the staff for the, let's be honest, pretty silly policy.

"Safety of students and staff is the first and most important of the many tasks of a school administrator. For the 10 years I have been high school principal, we have denied requests each year from students asking to bring older dates to prom. We do not chance leaving any stone unturned when it comes to safety. Most high schools have an age limit for prom attendees."

Yeah, we get the whole age limit thing dude, but this isn't quite the same as when some kid requests a ticket for their College boyfriend is it?

Well, at least if the school never backs down, Bryce still has a plan for his evening out with Grandma:

"She'll wear her gown and I'll put on my tuxedo and we will get all dressed up, go out to a fancy meal, and have our own prom."