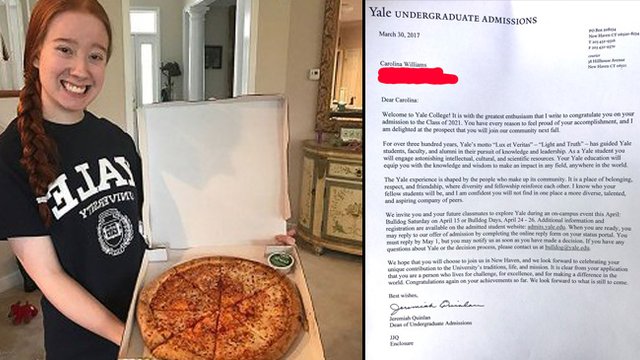 A teenager in the US has used her love of Pizza to get her very own place at college - including a place at an Ivy League school!

The Daily Mail reports that Carolina Williams of Tennessee was accepted to Yale University after focusing her personal statement on "one thing she liked to do" around ordering pizza from Papa John's.

"Accepting those warm cardboard boxes at my front door is second nature to me, but I will always love ordering pizza because of the way eight slices of something so ordinary are able to evoke feelings of independence, consolation, and joy".

And clearly the Yale submissions department agreed, two of the admissions officers writing her back a few weeks later with an offer after they "laughed out loud (then ordered pizza) after reading your application" and "laughed so hard on your pizza essay and kept thinking that you are the type of person I would want to be best friends with."

I just want @PapaJohns to know that I wrote a college essay about how much I love to order their pizza and it got me into Yale pic.twitter.com/lDlzEErHCn

Carolina eventually decided to turn down Yale in favor of Auburn University in Alabama, which offered her a scholarship. She'll be the first in her family to attend college and will study business.

Nice work Carolina - let's have a pizza party to celebrate!!!