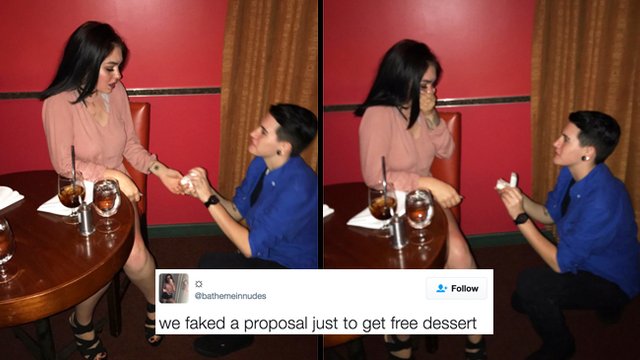 A couple that scams together stays together.

The best things in life are free. And nothing is better than free dessert.

After having a bad week and in need of cheering up, best friends Cati Domitrovich, 19, and Alex Nagle, 17, headed to a fancy restaurant and decided to try to get free dessert by pretending to get engaged. The gag is, it actually worked!

we faked a proposal just to get free dessert pic.twitter.com/T58jHVVBur

After the photos of the fake proposal went viral on Twitter, the friends spoke to Buzzfeed to reveal how they did it and, honestly, we're in awe of their balls.

"We just had to act like a couple the entire time," Cati told BuzzFeed. Taking a leaf straight out of Joanne The Scammer's book, Cati went to the bathroom to give Alex a chance to tell the waiter he was planning to propose, y'know, so they could get a photo of the scam in action.

"Everyone [in the restaurant] believed us and everyone clapped," Cati said. "We’re thinking about doing it other places too,” she added, although we think places might wise-up to their actions given that the original tweet has been retweeted over 22k times.

People have congratulated the happy couple on their fake engagement and free desserts.

@bathemeinnudes.. You guys are real genius

@bathemeinnudes this so funny and adorable

Who's up for trying this with us in London sometime this week?

QUIZ: What percentage generation snowflake are you?