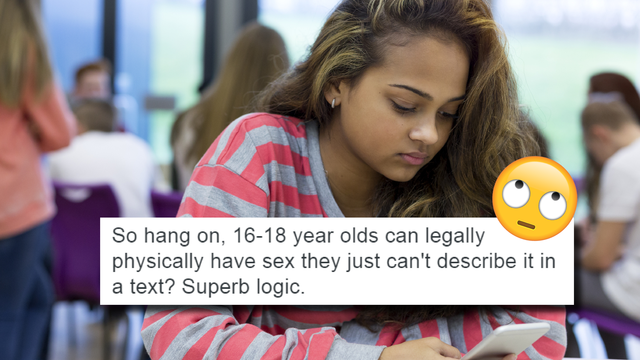 This is honestly so wtf.

With Britain's passage of the farthest reaching surveillance legislation in a modern democracy, and things just generally being a bit...off with democracy in general, it should strike you as no surprise that a member of the British government is interested in spying on your sexts.

British Health Secretary, Jeremy Hunt, has proposed a ban on sexting for under 18s that sounds like a load of gibberish, basically.

I just ask myself the simple question as to why it is that you can’t prevent the texting of sexually explicit images by people under the age of 18, if that’s a lock that parents choose to put on a mobile phone contract. Because there is technology that can identify sexually explicit pictures and prevent it being transmitted.

While teenagers having access to sexually explicit images is not ideal, mental health needs to be taken seriously, and Jeremy Hunt's suggestion is no solution.

It also seems that someone forgot to tell Hunt that sex is legal for people aged 16+.

Jeremy Hunt is a fucking idiot if he thinks banning sexting is the answer to the mental health crisis in young people.

It's very clear why Hunt wasn't appointed Technology Secretary. Hunt describes a scenario where phone companies work to implement detection software that monitors messages and scans for images that are sexual in nature. Also known as: that definitely doesn't exist.


So, what happens if these teens are using iMessage or WhatsApp? Both of these are equipped with end-to-end encryption, which prevents data from being collected and passed on.

What you text, who you text it to, and why you text it is nobody's business but your own. It's inconceivable enough that the Snooper's Charter will require phone companies to collect data on its users for up to 12 months. It's another thing to seriously propose looking into people's messages for certain material the government does not consider appropriate. That, pal, constitutes a surveillance state.

If Jeremy Hunt is interested in tackling mental health, here are some statistics he should work to address

Mr. Hunt, I am urging you to be sincere when it comes to taking on the many mental health challenges that young people face. Talking about scanning young people's text messages is not only dangerous and irresponsible, but completely lacking in compassion for teenagers with actual mental health concerns.