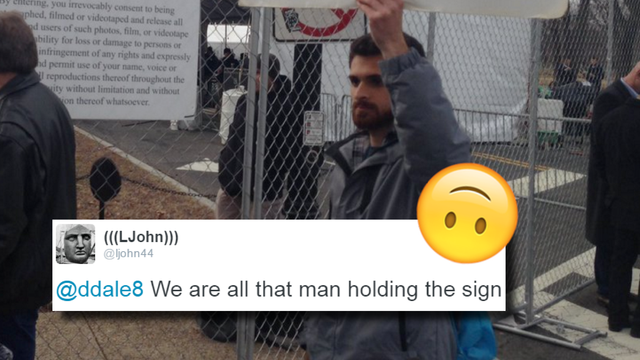 Today (January 20) is the day. Donald Trump will take the oath of the presidency today and that will be a new reality that we have now. So that's fine.

In preparation for D-Day (Donald Day), reporters and journalists are hitting the streets of Washington DC to take in the pre-inauguration scenes. One such journalist is Toronto Star's Washington correspondent, Daniel Dale.

While doing some vox pop work and uploading photos and quotes to his Twitter account, Dale encountered a man holding up a four-word sign that perfectly summed up how most progressives under the age of 30 are feeling right now.

The one protester at the pre-inauguration-fest line so far. pic.twitter.com/cFfkxLK3X8

@ddale8 His sign sums it up nicely though, doesn't it?

@ddale8 @DudaFanClub At least you can use that sign generally. Too-specific protest signs are a waste of ink and paper.

And someone else realized they'd also encountered this American icon.

Somebody find this man and let me know which Hunger Games district he is in. Where he leads, I will follow.