London Tube Staff Told Not To Use “Outdated” Gendered Language, People Freak Out 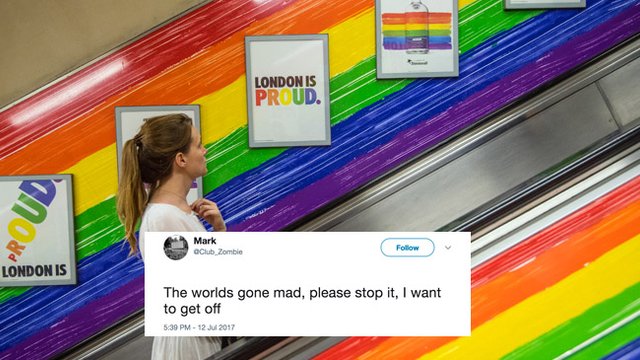 It was announced today that transport workers on the tube in London will stop using the words "ladies and gentlemen" in tannoy announcements to customers in a bid to become more gender-neutral.

If you've ever been on the tube in London, it's quite common to hear staff say "good morning, ladies and gentlemen" as people get on & off the train. Now, Transport for London has told staff to use terms such as "good morning everyone" instead. London tube is officially woke.

It follows months of campaigning by LGBTQ+ activists to change the “outdated” language. TfL boss of customer strategy Mark Evers agreed, saying they want, "Everyone to feel welcome on our transport network. We have reviewed the language that we use in announcements and elsewhere and will make sure that it is fully inclusive, reflecting the great diversity of London."

Sounds like a nice thing to do, right? Well, instead of reporting this as the positive, inclusive thing that it is, one news broadcaster, ITV, ran with an headline that implied tube staff were now "banned" from using 'ladies and gentlemen', which seemed to spring the 'anti-PC brigade' into action.

The worlds gone mad, please stop it, I want to get off

People have spent hours in meetings talking about this sort of crap and being paid for it. Madness! Have they got nothing better to do?

What a load of old bollocks ..country has gone mad...ffs.

I think you get the picture. Many people have come out in support of the change, including mega bae Olly Alexander from Years & Years.

no they didn't no one is banning anything they're saying good morning instead because binaries suck https://t.co/fikQX7nIw5

Ladies and Gentlemen has been banned as an announcement by London Tube bosses. Well it's about bloody time for the gender neutrals.

Mood: Laughing at everyone losing their shit over TFL announcers not using 'ladies and gentleman' anymore. pic.twitter.com/7ynhQgLct9

So many people on this thread are acting like it affects them! Since when did the phrase 'ladies and gentlemen' become so important to you!

Here's the tea: this is NOT a ban. In fact, TfL have even acknowledged that "well meaning staff may still use 'ladies & gentlemen' from time to time". Nobody is going to lose their jobs if they use the gendered terms.

This is a change in language. As a spokesperson for Stonewall commented, language is extremely important to the lesbian, gay, bi and trans community, and the way we use it can help ensure all people feel included. If this small change helps people feel included and accounted for, then surely it's a good thing. What are cis-gendered people really losing here? The answer is quite obvious: nothing.