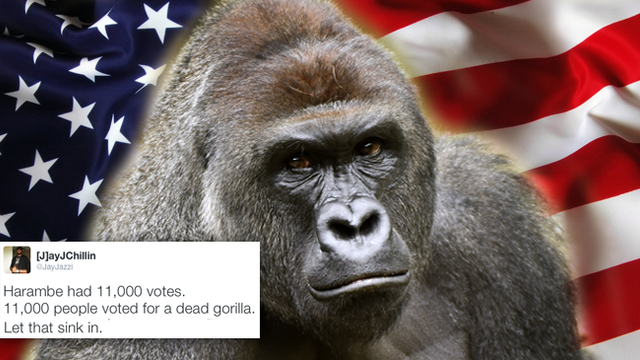 That feeling when you're the most qualified candidate of all time but LOL, dat dead Gorilla funny tho…

We’ve all been guilty of holding onto memories and dank memes of our fallen angel Harambe over the past few treacherous months following his untimely death but y’all… you had to take it one step too far didn’t you. Yes, memes are fun and brilliant and a GREAT defence mechanism but not when people’s civil rights are on the line, ok?

In case you missed it, America had an election. It was a big one. 'HUGE', some might say. *vomits a little bit* The two main candidates were neck and neck and in some counties and states there were only HUNDREDS of votes between them. That’s how close it was, that’s how important it was.

According to Twitter statistics over 11,000 people opted to cast their votes in favour of Harambe. In fact, Harambe was receiving the same amount of traction on Twitter as third party candidate Gary Johnson.

Let that sink in.

I legitimately voted for J.R Smith and Harambe #StayWoke

And there’s now a ton of pictures of filled in ballot papers circulating Twitter with Harambe written in as a genuine vote.

@TheAnonnMessage not mine but i saw it om facebook pic.twitter.com/10hgDUno2g

America: "we must not let Trump become president!!!"

According to Buzzfeed News, it’s not *actually* that simple to just write in a name as a candidate so this whole entire thing may not even be true. It turns out that there’s a whole load of paperwork for candidates who genuinely wish to have their write in votes counted and actually, not every state even allows them.

So effectively, those who actually DID write in Harambe ended up wasting a vote for the LOLz. (Laughing out loud, which ironically is something the majority of us will probably never do again until 2020, at least.) 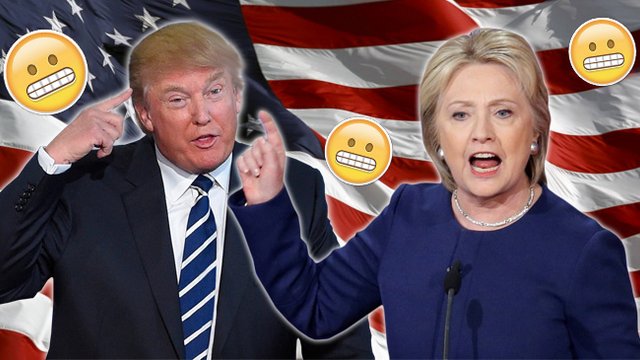 10 Life-Saving Songs For Every Possible Outcome Of The Election