Why does this KEEP happening to Zendaya?

Remember when you were growing up and your mother would always tell you, "If you don't have anything nice to say, don't say anything at all." Those were pretty useful words to live by, in retrospect.

The last thing the world needs right now is more people passing judgment on each other, whether online or IRL. Bette Midler and Chloe Grace Moretz didn't get that message last week and now Zendaya is finding herself battling a famous hater once again.

Zendaya won big at the Kids Choice Awards and she definitely deserved it. Her rising star has almost blinded us over the last 12 months with her acting chops, musical ability, and modelling gigs (and her amazing brows if we're being honest).

Unfortunately, Zendaya didn't have time to bask in her post-award glow because comedic writer, Julie Klausner just HAD to share some words about the Disney Channel actress. Klausner called Zendaya a "thinspo model for [...] impressionable tweens" and then tweeted the following:

You don't have to have an eating disorder to attend the Kids' Choice Awards....but it helps!

I will never stop criticizing celebs who perpetuate dangerous beauty standards for a generation of girls who grow up thinking they're fat.

I'm concerned with the generation of girls who aspire to look like Zendaya. I do not worry about Zendaya's health or care whether she eats.

...I won't apologize, non-apologize, delete tweets, backpedal or refuse to own my shit. BUT- I will be more thoughtful going forward. /end

Of course Zendaya had some healthy clapbacks.

Do you find this funny? I will write another paragraph to educate you aswell #youreallywannabenext? https://t.co/z6dXOJ3Tai

As someone who once accidentally lost nearly 20 lbs one summer by literally doing nothing, I can definitely attest to the fact that it can be hard for young busy girls to put on and keep on weight.

Zendaya is 19, an actress, a dancer, a singer, and a model. Her schedule is beyond full of various engagements and one quick google of "Zendaya airport" will give you an idea of how much the young star travels. Julie's assessment that Zendaya is a "thinspo model" completely ignores the fact that every body is different and stress and general busy-ness can be a huge factor in how your body looks.

Julie's assessment also ignores the fact that she definitely doesn't need to have an assessment about Zendaya's body.

This comes a year after a huge controversy involving racially insensitive remarks made by The E! channel's Giuliana Rancic. Rancic claimed that Zendaya's hella cute Awards Show dreads probably "smelled like weed and patchouli oil". Of course, Zendaya stood up for herself and Rancic ended up apologizing for her comments. 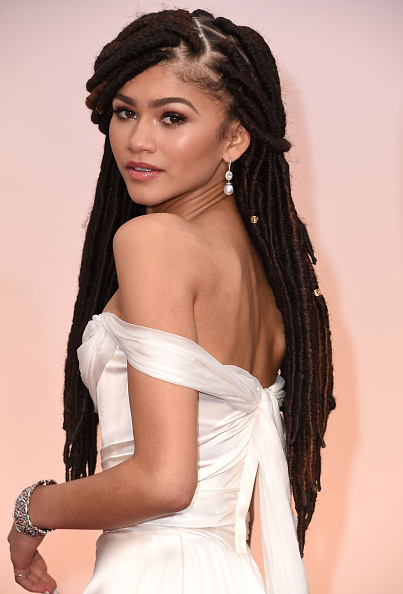 The type of criticism Zendaya is receiving is really disheartening. Zendaya is a young woman at the top of her game, facing seriously superficial criticisms from other adult women. And the worst part is that these women are strong and successful and inspirational in their own right, but can't help but help but share mean spirited words about a fellow entertainer.

It's wild to think that Zendaya may have to spend her 20s defending her race, her appearance, her hair, her clothing, the pictures she takes etc. We're not talking about men making sexist comments to a 19 year old girl. We're talking about women who have likely faced similarly cruel words and have learned nothing from them.

Speaking negatively about another woman's appearance isn't hilarious or quirky. It's called being a bad feminist and a hater. Zendaya is beautiful, smart, and great at what she does. Instead of talking about how skinny she is or what her hair looks like, we should talk about her accomplishments and the amazing opportunities she is scooping up every day.

OMG!! Is Zendaya About To Bless Us With Make Up Tutorials?