Madonna Compares People (Not) Listening To Her Leaked Album To Terrorism

The Queen of Pop throws her crown out of the pram in a series of Instagram rants.

You might have missed the news that Madonna had a new album on the way, if it weren't for the stink she's been kicking up.

After 11 unfinished tracks for work-in-progress Iconic leaked online a couple of weeks ago, Her Madgesty has been on a one-woman social media rampage that has come to a head with controversial comparisons to rape and terrorism. Not to mention the destruction of one poor and unsuspecting iPod.

This broken ipod is a symbol of my broken heart! That my music has been stolen and leaked! I have been violated as a human and an artist! #fuckedupshit

Just as well she had another camera to hand to document the rage, right?

Madonna made a point to thank the fans who hadn't listened to her leaked tracks yet - we'll leave you to decide whether or not it was because she asked them not to.

But apparently the lukewarm fan response to that photo didn't offer the comfort she was expecting. Shortly afterwards, she posted a significantly more inflammatory tirade that looked as though she has been reading a book called the Complete Guide To Volatile Buzzwords (And How To Misuse Them): 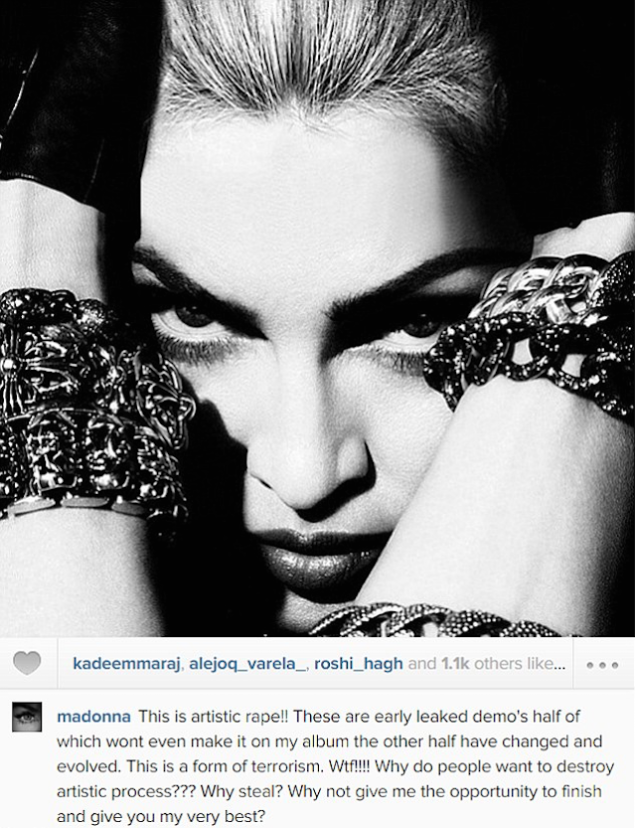 Really, Madonna? You really actually want to compare your leak to terrorism, especially on a week where at least two real and actual terrorist attacks in Sydney and Peshawar have resulted in over 130 people being killed?

Also, no rape is artistic. One would expect Madonna, as a documented victim of past assault, to consider just how certain fans might be affected or triggered by her throwing the word around to describe her unfinished music being listened to. A little tact goes a long way.

The photo has since been deleted, but as Madonna is learning the hard way, things don't get scrubbed from the internet very easily; whether it's damning evidence or music leaks. But plenty of artists who have been dealt the same blow have quickly learned to turn it in their favour; or even if they haven't, have at least handled it a lot better.

Madonna peaked in an era where music was, admittedly, much harder to steal. She claims the iPod smashing photo is a symbol of her broken heart, but it reads a lot more like frustration with the evolution of music, and the Digital Age providing a lot more ease of access.

There's no word on an official release date for Iconic, but hopefully by the time it's actually ready, Madge will have found a better publicist.