True Love Is Dead: Miss Piggy And Kermit The Frog Have Called It Quits

WHO IS NEXT? NO ONE IS SAFE.

In what is sure to be known as the summer that love officially died, another influential celebrity couple have called it quits. After 37 years as a couple, Kermit and Miss Piggy have made the difficult decision to end their romantic relationship, but continue their professional one.

Here is the official statement from @RealMissPiggy and myself regarding our relationship: pic.twitter.com/uHCSsokqWR

And, as if all this wasn't hard enough to process, the whole thing is Wikipedia official. 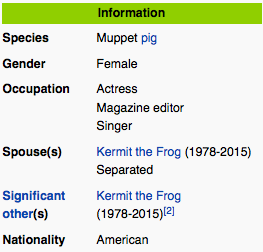 Fans are understandably shocked by the annoucement. Kermit and Miss Piggy always seemed like the couple that would stay together forever.

FORGET ZAYN AND PERRIE, KERMIT THE FROG AND MISS PIGGY BROKE UP WTF MY HEART

QUIZ: What Does Your Breakup Playlist Say About You?