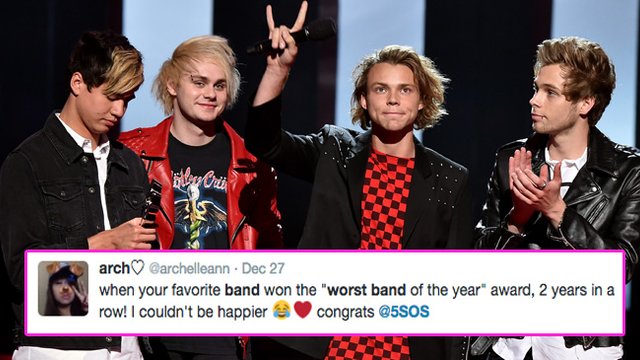 The boys have done it again and the fans are just so damn proud...

They've done it again. After a hard fought campaign, 5 Seconds Of Summer have achieved the highest accolade of the year, being officially named as the worst band of 2016.

Not only that, the boys also topped a similar poll in Kerrang magazine, taking the top spot on the "Worst Band" list for the second year in a row.

Most bands, of course, would not take too kindly to this sort of news...but 5SOS seem to be pretty cool about the whole thing!

WE WON WORST BAND OF THE YEAR AGAIN! 2 years in a row. Thanks for voting everyone

I'm a sucker for positivity

You gotta keep it positive!

And, encouraged by the boys' reactions, the fans took to Twitter to throw the ultimate celebration!

5sos were voted worst band again, 2 years in a row, I'm getting so emotional they deserve it so much

Friend: 5SOS has no talent
Me: not true, they're so talented! They won worst band of the year 2 years in a row!
Friend:
Me: I'm so proud

When 5SOS won the worst band 2years in a row pic.twitter.com/DVi3bZpQHU

Congrats boys - anyone can win "best band" awards but what you're doing is a real skill!

5SOS are expected to release a new album in late 2017.