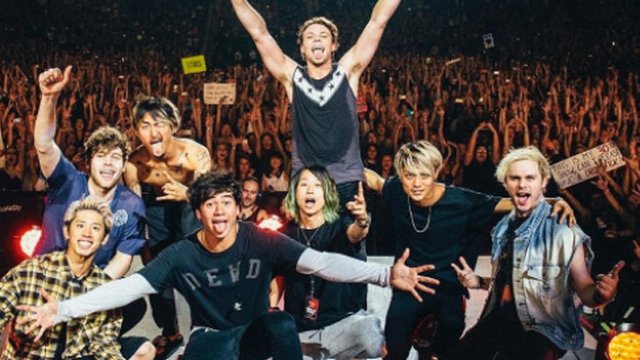 The Japanese legends have lined up some incredible collaborators for their brand new album '"Ambitions"...

Japanese powerhouse ONE OK ROCK dropped their latest album Ambitions today (January 13th) and it features more than a few famous faces among their collaborators.

The group, recently signed to Fueled By Ramen, have worked with the likes of 5SOS, Avril Lavigne and All Time Low's Alex Gaskarth on their eighth (!) record which looks set to turn them into HUGE stars in the US and Europe.

Serving up some Tarantino realness with that cover right there...

The 5SOS boys have already been doing their part in the promo campaign, excitedly tweeting about their track 'Take What You Want'.

we did a song with our friends in @ONEOKROCK_japan called 'Take What You Want' that just came out on their new album. check it out!! pic.twitter.com/VdB7rjMyAW

New music with One Ok rock and it's fucking rad. Here it is #ambitions https://t.co/svMtYhmaNL

And Mr Gaskarth has also sent out a link to his inclusion, 'Jaded'.

Another record you should grab immediately !!! @ONEOKROCK_japan put out a banger! #Ambitions pic.twitter.com/JOT0WeeroH

"Put out a banger" is a bit of an understatement tbh.

But perhaps most excitingly of all is the long awaited return of the skater girl herself Avril Lavigne, appearing on the track 'Listen'.

She got us majorly hyped for her new album later this year. Bring it on Avril, we are ready for your grand return!

Basically, ONE OK ROCK have assembled the ultimate pop punk party crew for their latest release and you should really go and pay them some attention. Get the album Ambitions on iTunes now.