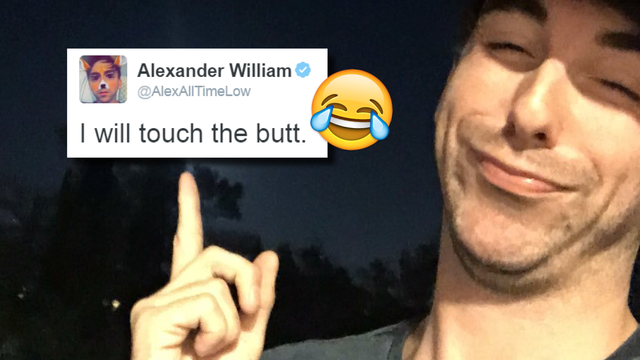 If you're not already following Alexander Gaskarth on twitter I have some advice. 1) Love yourself and B) Do it now. If you need a nudge in the best direction, here are some sample tweets to wet your internet whistle.

He always has good advice.

He's actually not afraid to get political.

I feel like a desire for change in a knee-jerk era has put us in a very compromising position as a country. Same bat-time, same bat-channel.

It's on you, young people. Antiquated ideologies threaten to royally fuck things up for future generations. Push back.

Or wade into controversy...

If My Chem is reuniting I did it and you can thank me directly. If not, please disregard.

This iconic shot which should actually be in MoMa.

When you put your foot through a rip in your jeans and pretty much end them for life.

The real debate tonight is the one going on inside my head as I decide whether or not to eat another slice of this delicious pizza.

Eating a good breakfast so I can be a #StrongBoi on stage tonight.

It's important to set goals, you know.

I will touch the butt.

I need this tweet to somehow become a 90-minute feature length film.

Distant sound of fireworks. I wonder how the dogs in this city feel. Scared. I reach for my mask and cape. Vengeance.

Am I the only one who lives for his truly iconic breakfast concepts?

Music Video: Feed me eggs while it rains coffee from above, and we both cry maple syrup tears.