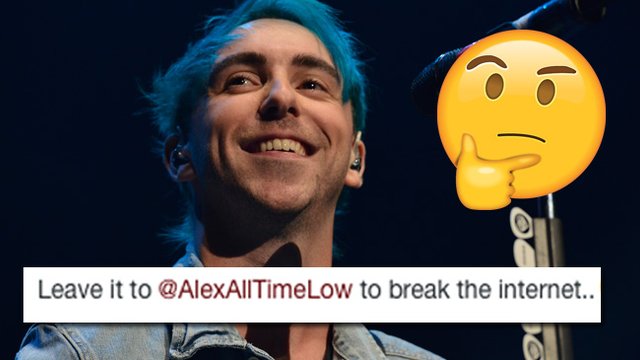 Alex has sent every ATL fan into meltdown with a cryptic piece of art posted on Twitter...

All Time Low's Alex Gaskarth has got fans on Twitter seriously hyped as he teased some mysterious artwork that could be related to the band's new album...

The band are thought to be preparing their seventh studio album, the follow up to 2015's massively successful Future Hearts, with a full UK tour scheduled for March of this year alongside Swmrs and Waterparks.

And now Alex has taken to social media to post a cryptic message featuring what looks like some kind of poster art...

Hmm - just some casual graffiti or a hint at things to come? Could Alex be working those eyebrows in some kind of new promo shoot with a spraypaint-heavy backdrop? And how about that joystick emoji - new album got a bit of a retro feel perhaps?

Whatever this means, it's sent the fans into an understandable level of frenzy!

@AlexAllTimeLow gurl does this picture have anything to do with this tweet from a month ago pic.twitter.com/OSlMnzSojt

It's all a bit much to take in tbh.

Whatever the picture really means, hopefully the end result will be some new ATL music arriving very soon. Please...

All Time Low kick off their UK tour on March 10th at the Eventim Apollo in London.

Got your own theories about Alex's art post? Let us know below.

So...Alex just liked the tweet link of this article...

Does that mean our theory is correct? Have we just seen the new ATL artwork? We reckon so!