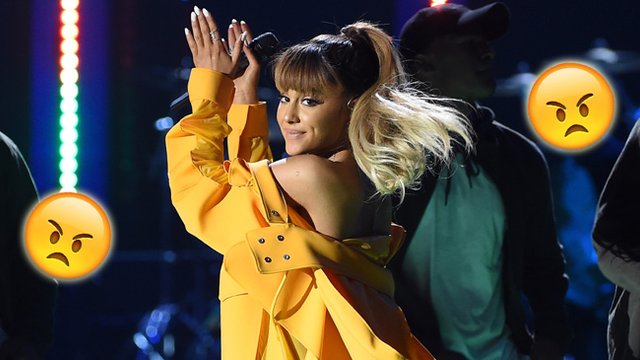 "We are not objects or prizes. We are QUEENS."

Last night (27 Dec) our favourite ponytail enthusiast Ariana Grande took to Twitter to reveal a disturbing incident involving a Mac Miller fan who was sexist to the star in front of her and Mac Miller.

It started with Ariana and Mac walking to their car to pick up some food. A young fan followed them and by the time they got in the car he was speaking to Mac. Then, for some reason that defies any human decency, he says to Mac while Ariana is sat next to him, "Ariana is sexy as hell man I see you, I see you hitting that!". Wow.

Read the full message below.

Ariana goes on to explain that the incident made her feel "sick and objectified". "I've felt really quiet and hurt since that moment. Things like that happen all the time and are the kinds of moments that contribute to women's sense of fear and inadequacy. I am not a piece of meat that a man gets to utilize for his pleasure." Amen.

She added that she wanted to make it public so we can "talk about these moments openly because they are harmful and they live on inside of us as shame. We need to share and be vocal when something makes us feel uncomfortable because if we don't, it will just continue."

UPDATE: Ariana has taken to Twitter to fend off accusations of hypocrisy about her previous messages.

seeing a lot of "but look how you portray yourself in videos and in your music! you're so sexual!" .... please hold.. next tweet... i repeat

expressing sexuality in art is not an invitation for disrespect !!! just like wearing a short skirt is not asking for assault.

Women's choice. our bodies, our clothing, our music, our personalities..... sexy, flirty, fun.
it is not. an open. invitation.

You are literally saying that if we look a certain way, we are yours to take. But we are not !!! It's our right to express ourselves.

This isn't the first time Ariana has confronted such blatant sexism in public. Late last year Ariana shut down two radio hosts for their sexist line of questioning. Watch the clip in all it's righteous glory below.

Ariana Grande tattoos: All 40+ of Ariana's tattoos and their meanings