Wait... Why Are Beyoncé Fans Cutting Themselves? 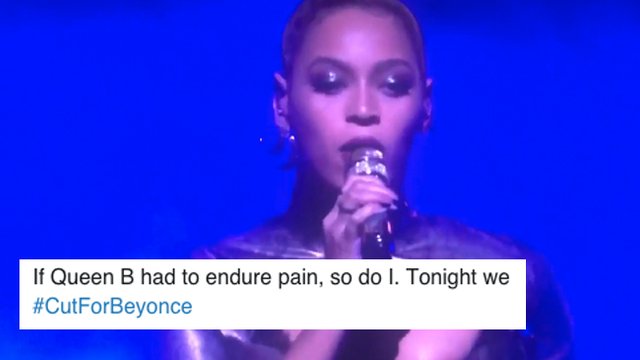 After Bey's concert injury, some fans have gone to crazy lengths to show support...

Popular singer and Queen of the entire world Beyonce appeared at the Tidal charity concert this past weekend, suffering an injury while on stage.

Bey accidentally tore her ear open on an earring and is seen visibly bleeding in several fan videos, gamely carrying on with her performance as if nothing has happened.

Moment in what Beyoncé realized that her ear was bleeding. #TIDALX1015 pic.twitter.com/DxDG8PynAL

However, while Beyoncé clearly doesn't need our help on anything 'cos she runs the world, some fans have gone to extreme lengths to show their support to their hero.

Namely, they have been cutting themselves to bleed in solidarity with Beyoncé.

If the queen bleeds the hive must unify and leak our blood to restore her spirits. Beyhive we must #CutForBeyonce pic.twitter.com/VeusI2fB5I

The hashtag "Cut For Beyonce" began trending as fans lined up to show that they too were capable of bleeding from their ear area.

Although, we are guessing some of these are fake...

We've seen fans of the likes of Justin Bieber and One Direction go off the deep end of their devotion in the past but now it seems the Bey Hive have some full-on hardcore types among the ranks who should really put the scissors down!

Thankfully, other fans were more sensible.

As a person who self injured for years. Please don't #cutforbeyonce or #bleedforbeyonce . Self injury and cutting is not a joke.

Y'all are outrageous. This #CutForBeyonce gotta stop now.

Basically, stay safe kids. It's what the queen would want.