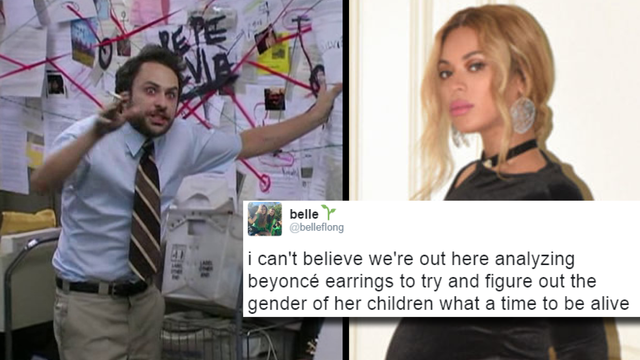 Do ya'll ever sleep?

Beyoncé Knowles announcing that she is pregnant with TWINS is still the most important thing that has happened to me in 2017.

Since Beyoncé gave us the announcement for The Visual Pregnancy™, the whole internet has been speculating on the sex of babies.

Will she be having two girls? Two boys? One of each? People think she has been dropping hints since their conception.

Who's doing the research about the symbolism of Bey wearing green & red? I thought the emeralds meant that she was giving us May babies!

Am I the only that thinks Beyoncé's maturnity pictures have subliminal messages to the babies' names and sex ?

Beyoncé, in all her craftiness, has apparently dropped some huge hints the Carter Twins are boys. Here's what the internet thinks it knows.

Beyoncé is wearing the If I Were a Boy earrings again...

does this mean she's having twin boys?? pic.twitter.com/CxEgQ8wxCb

In the 2009 music video for "If I Were A Boy" Beyoncé can be seen wearing a pair of round silver earrings. Those earrings have shown up once more as Beyoncé enters pregnancy crunch time with the royal progeny.

This is a pretty tenuous connection but the consensus seems to be that she is speaking in code to the Beyhive.

Now, far be it from me to say that this isn't a quality conspiracy theory but...

On the other hand, Beyoncé is so extra that I truly would not be surprised if this was actually legit.

Beyoncé trolling us by wearing the IIWAB/"Boy" earrings. I've had enough. pic.twitter.com/uIe9wDLG7W