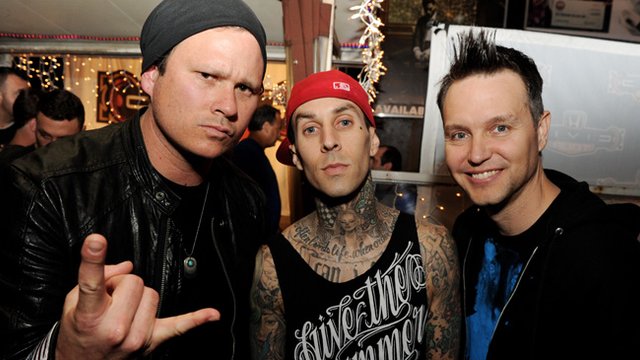 Things are looking up for Blink fans!

When we spoke to Travis Barker last year, we asked the Blink 182 drummer whether he has any communication with his estranged bandmate Tom DeLonge. The answer was categorical: "no".

Up until recently, things didn't look much better. Earlier this month Tom denied he had quit the band but he did claim he was working with the government and Department of Defence on a documentary called Sekret Machines about UFOs (as one does...).

As the above post alludes to, it would appear that Tom and Travis at some point began speaking again. Well, Tom has now invited Travis on a day trip to the waterpark on Twitter - because what better way to get over a feud than putting on some swim shorts and ride some water slides for an afternoon?

It all started with a simple hello a week ago...

Then the trip to the waterpark was suggested.

@travisbarker Let's go to Great Wolf Lodge in OC and do water slides together and post it for fans...

So what does this mean for the future of Blink 182? If Travis and Tom are talking again, this can only be a good thing for Blink fans. As some of you will remember, the reason Travis and Mark recorded a new Blink album without Tom was because Tom said he was too busy to commit to the project.

It would seem Tom doesn't feel too bitter about this if he is willing to hang out with Travis again? Maybe the three of them will end up back in the studio together again?

What do you think? Should Tom get back in the studio with Travis and Mark, or do you not care anymore?